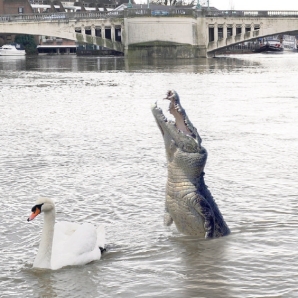 One of the rules of journalism is that if a question is posed in a headline, then the answer is always "no".

This can be illustrated with this marvellous tale from the newspaper that was formerly known as the Reading Evening Post :

Is there a crocodile in the River Thames in Reading?

You will be unsurprised to learn that the answer is no, and that the man who spotted said mythical beast was certainly not in his cups at the time.

This story led me to the writings of Independent columnist John Rentoul, who regularly features stories from around the world in his QTWTAIN feature.

QTWTAIN, if you haven't worked it out, means Questions To Which The Answer Is No.

Is George Osborne a Zxillon from the planet Tharg?

Will the world end on 21st December?

Are ducks about to stage a military coup?


All classic QTWTAIN questions, except possibly the first one.

As Mr Rentoul did so much to promote my works, it is high time to return the favour. Dip in here for the never to be forgotten 'Is Spongebob Squarepants the new Che Guevara?'

The answer is no.
Posted by Alistair Coleman at Wednesday, February 27, 2013