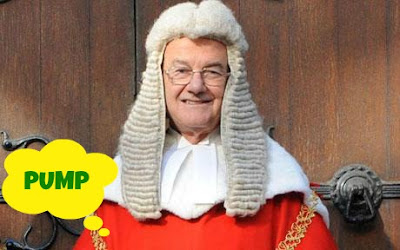 On this, the 11th birthday of this blog, what fitting way to mark the anniversary than with a post about bottoms.

The whole world and his dog has sent me this news story for my Dull News blog, but I think it deserves a wider audience, and I shall quote in full:

THE quiet dignity of a court session was abruptly disturbed when someone loudly broke wind in the public gallery.

Nobody apologised for the noisy interruption – and there were anxious looks from people nearby who feared they might get the blame. Grimsby magistrates pretended they had not heard a thing, and in a seemingly unrelated incident a few minutes later, all the lights went out for a few seconds before flickering back on again.


Of course, in a court with a judge, the beak would immediately invoke the 1926 Rex vs Fartparts ruling:

"Not guilty, eh? Surely you have heard: He who denied it, supplied it."


And so the scales of justice carry on their endless something something fight against crime something.
Posted by Alistair Coleman at Wednesday, February 06, 2013

I recently read a news story where the defending attorney was one Sally Fudge. We are of course waiting for the day she is promoted to Judge.