On Feeling One's Own Mortality 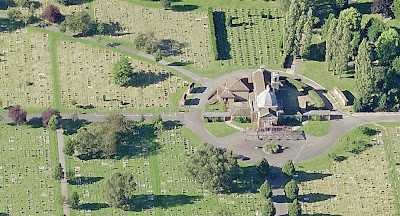 I attended the funeral of a very fine man he other week. He had died far too young, and the non-religious service was heaving with friends and former colleagues celebrating his life.

So full, in fact, that I was forced to park in Reading Crematorium's overflow facility, a hefty walk from the main building. Now, this may seem a trivial problem to you in the face of other people who were having a far worse day than I, but bear with me*.

It being my 47th birthday, the event made me ponder my own mortality and my own inevitable encounter with Death's icy grip.

This pondering was not helped by the shortcut I took from chapel to car park across the not-so-tenderly mown lawns of the graveyard, where tombstones told me the aged of the deceased.

Then, I saw these words - actually carved on an actual gravestone as an actual epitaph to an actual adult, the sum total of one man's life in five actual words and three kisses - that I felt Death's icy grip etc etc etc:


In the somewhat paraphrased words of Mr Neil Gaiman: Death - It's the high cost of living.

And, as usual, it takes a funeral to remind you how alive you are.

* No, really, there's a bear and it's hungry and send help for the love of God aaaaaaaaaaargh
Posted by Alistair Coleman at Monday, February 25, 2013

Despite the high cost of living, it remains quite popular.

You leave your mortality alone, mate, or you'll go blind!

I'd be happy with some kisses on my tombstone.

Boltzmann's gravestone does not bear his name, just the formula he discovered.

Ole Phat
You're looking at a cropped image. The stone bears Boltzmann's name.