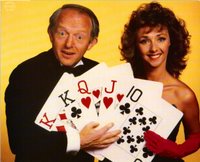 Our family joined a local social club one year. The reasons for this were simple: all day, cheap boozing on a Sunday when every other pub and bar in the district put the shutters up. Membership also gave us the run of the oversized village hall, with its colossal stage at one end.

Unfortunately, this great big hulking thing sitting there mixed with large quantities of intoxicating substances got the brains of certain members working. And the fools said this: "Why don't we put on a show? For the whole village, like."

It soon transpired that virtually the entire membership of the social club had only joined for the cheap bar and had no desire to make fools of themselves on the stage whatsoever. But, as any social club member will testify, there exists the kind of person whose entire lot in life is to be far too cheerful and to organise things. They turned, heaven help us, to the Women's Institute, who weren't above that sort of slatternly behaviour if they got a cut of the takings.

With a promise of a cheap bar and a buffet at half time, we bought tickets and expected the worst.

And so the show began. And what a show.

The performing troupe comprised a raisin-like granny on the piano, and a load of pensioners that couldn't remember the words to all the songs they performed. It wasn't as if they hadn't had enough time to rehearse - not one number was less than fifty years old. It was the kind of thing drama school students put on for the inmates of old peoples' homes, to take "the old dears on a trip down Memory Lane", but only serves to turn them into raging, pension book waving maniacs; only this was in reverse, a sort of wrinklies' revenge.

Then: horror. The magic act.

"Can we have a volunteer from the audience?"

The Great Wazoo's eyes settled on me, the terrible bastard.

Despite my protests, and tripping over by best tartan-checked flares, I was dragged out of the audience and onto the huge stage. After a string of dismal tricks that never quite went right, I had to hold up a curtain while the Great Wazoo's old and wrinkled assistant, Brenda, escaped from a box into which she had been rather poorly padlocked.

Well, bugger me stupid, if the old cow was only escaping out of a flap in the side. I was expecting proper magic, but got only trickery, and to this eight-year-old magician's assistant this clear case of fraud simply wouldn't do.

Nobody would listen to my protests at the extreme lack of actual magic going on, so I took it into my own hands to reveal the fraud that was going on in front of my very eyes.

I let go of the curtain.

I let go of the curtain, to reveal a surprised looking pensioner in a leotard, one sagging breast determined to escape from its nylon-clad captivity, as she tried to crawl to the safety of the wings.

I remember the Great Wazoo's words as if they were yesterday: "Brenda! Get back in that fuckin' box!" Then: "You little bastard."

I fled, catching a rear view of the Unmagnificent Brenda and a severe case of spider's legs as I helter-skeltered back to the safety of the stalls.

My stage career was over, and a lifetime of mental issues began.
Posted by Alistair Coleman at Friday, January 20, 2006