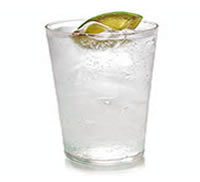 My old dad was in the Territorial Army. An officer too, status afforded to him by the fact that he is a doctor, and the armed forces need people who can glue soldiers back together after they've been blown apart.

See? Listen at school, and you get your own green uniform, a great big ambulance and people who have to call you "sir" without the prefix "I think you should leave now".

You also get Thursday nights at the centre of the known universe - Duke of York's Barracks in Chelsea, home to a splendidly appointed officers' mess.

There was a rota for the bar, shared between the officers, the NCOs and the other ranks, and when it was dad's turn, we kids were dragged along for the evening, told to be good and left to guard the crisps and peanuts.

And if we were good, we were rewarded. It was about this time that I developed a taste for Schweppes Indian Tonic Water. Being an officers-only zone, it was the only non-alcoholic drink they stocked, and by God, we went through gallons of the stuff.

To alleviate the boredom, and to stop us from running amok round some of the British Army's darkest corners, we were put to work in the bar.

Employed as a six-year-old pot man, I would be sent out from behind the bar to collect the empties. The officers thought this was incredibly cute and encouraged me to "finish their drinks for them". An incredibly charitable act, that has been hidden in the darkest recesses of my brain ever since, and for very good reason.

I drunk and I drunk, and some of it wasn't as horrible as I thought it would be.

I drunk until I was as pissed as a little beetle. Then, my new friends taught me a couple of party tricks, including a song about (and I quote) "A stupid dicky-di-dildo", which I then repeated to my parents, at length.

I declined the offer of a cigar, though. Even then, I had standards.

The rest of the evening, I must confess, was a bit of a blur, and a telling prediction of what would lie ahead in my young adult life.

They found me, hours later, in a pool of my own vomit, curled up in the back of a military ambulance.

I swore the next day: "Never again."

Yeah, right. Next Thursday would roll around soon enough.
Posted by Alistair Coleman at Friday, January 13, 2006