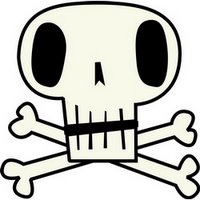 Close relations are involved here, so names have been changed to protect the guilty. Let's just say "Karl" and "Joe" are corrupt uncles of the Duck household. Yes. Corrupt uncles. And coming from a large, and larger than life, family, they got about a bit.

In the countryside near where they lived was an old church. No longer used, no longer consecrated ground, the place was left to rot. And naturally, it became a magnet for lads of a certain age looking out for somewhere exciting to play, take unescorted lady-friends and hide publications of a certain nature.

And what a playground the church was. A spooky graveyard, a none-more-dangerous tower, an empty nave that doubled up as an indoor football pitch. And the crypt.

After several visits to the place where neither Karl nor Joe could summon up the courage to plunge into the ghostly darkness, they rustled up a couple of candles from their mum's kitchen, and headed off to the old church on their bikes. They would conquer the land of the dead.

And, by candlelight, the lowered themselves slowly into the waiting abyss.

The church people, in closing down this particular place of worship, had moved out all the bodies and taken them to consecrated ground elsewhere. To prevent, basically, local oiks coming in and waking the dead whilst blundering about with mum's stolen candles, looking for a likely place where they could stick their hands up the local skirt.

Except, in the far corner, for reasons unknown, there was a tomb. And lifting the top slab off the tomb, there was a coffin. And inside the coffin was a skull.

So, what do you do when you find a dead person's head in the crypt of an old church? As any sane person knows, the right thing to do in these circumstances is to run away like buggery with the thing under your arm, stick it on the rack on the back of your bike, take it home and hide it under your bed. So they did.


That night, their shared bedroom writhed with fear. Always, always, it seemed as if someone was in the room with them. Watching. Waiting. Doing a bad ventriloquist act.

After a week of fitful sleep, punctuated by strange, terrifying dreams of years gone by, and the awful revenge of an unseen figure, the terrified duo dug a big hole in the garden, threw the skull in and buried it.

Then, they moved house.

A few years later, a policeman came to the door.

"Is anything wrong, officer?" asked Mum.

"Yes, it's about your previous address, madam," he replied.

And so, shit met fan.

The new tennants had decided to do a bit of gardening, dug a hole for some new shrub, and had found Gottle of Gear staring back at them through lifeless sockets. They had, the policeman said matter-of-factly, "crapped their pants, madam".

"And we wondered, madam, if you might know anything about this?"

Being the 1950s, punishment was swift and merciless: a good old fashioned clip round the ear and justice was well and truly served.
Posted by Alistair Coleman at Friday, January 06, 2006