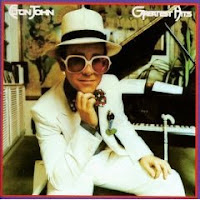 I'm showing my age here, but BBC Radio 4 broadcasts a programme every now and again called Generation Tracks which asks these very questions, usually of some worthy celebrity who can talk at length on this sort of thing.

You know: the kind of person they normally have on Just a Minute and the like. People who don't swear on the radio and talk about sick, bottoms and ladies' bosoms. Face it. They're never going to ask me.

So: Lazy bastard that I am, I thought I'd steal the idea completely and throw the idea open to you, dear reader. Shudder before my musical legacy:

We only ever had four pop albums in our house. We moved up from London to just outside Reading in 1972, and somehow our Dansette turntable was replaced by a device known to my mother until the day she died as "the Radiogram". Dad bought an entire shelf of "interesting" classical works in enormous boxed sets, while mum went out and purchased a couple of Beatles tapes, Neil Diamond's Twelve Greatest Hits and a lurid green edition of Elton's finest tracks. And a Hinge and Brackett comedy album, the least spoken of the better.

Naturally, years of exposure to this condensed history of popular music interspersed with a couple of old blokes in dresses turned me into the fine, balanced chap you see today. From this it is always Goodbye Yellow Brick Road that rises above the rest, especially so since Candle in the Wind has now been murdered on the altar of Princess Diana sentimentality.

Looking through some 1980s trivia book recently, it revealed that a poll of American school kids in the seventies revealed that the celebrity they most admired was none other than Elton Hercules John himself. If only they knew. No wonder the world's in such as mess.

To my kids: Prefab Sprout - The King of Rock'n'Roll

It appears I still have some work to do on this front.

Now: your turn. The non-breeders amongst you will just have to pretend you have offspring of some sort, or adopt an unwilling and frightened nephew for the purposes of this demonstration.
Posted by Alistair Coleman at Saturday, May 19, 2007