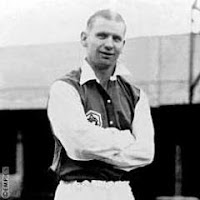 Last night, for the first time in about five years, I donned my comedy big shorts and genuine antique Arsenal shirt and played football.

Real football with real grown-ups, running up and down a real football pitch, kicking a real leather football laced up with stair-rods toward a genuine onion bag. Some of them took it all rather seriously, and did proper warm-ups and everything before kicking the ball very hard, at my head.

And now my legs no longer work as they should.

Determined to avoid the worst of the action, and perhaps escape with my life, a skulked around at the back until misadventure got the better of me and I careered up the pitch doing a kick with my Dunlop Green Flash plimsolls until I was told to stop.

It was all rather exciting, I can tell you for nothing, and nearly as tiring as eighteen holes on my local golfing links.

I thought I was excellent.

In fact, the referee thought I was so good, he wrote my name down in his book.

After that cavalcade of thrills, you might think this week's Thursday vote-o would be positively pedestrian. Not a bit of it - choose from this trio of Tales of Mirth and Woe with the vote-o quote-os provided by the House of Lies (Deceased)

* Doctors and Nurses: According to the Guinness Book of Records, the biggest bar in the world is The Blind Beggar pub in London's East End. On 9th March 1966, the establishment held approximately 3,000,000 Cockneys, all of whom would swear on their dear old mum's grave that they were present when Ronnie Kray shot George Cornell in an argument over a spilled Babycham.

* Grand National: All prospective celebrities must fail an entrance exam before being allowed to become famous. Jade Goody sadly passed her exam seven times in a row before excreting enough of her brain to gain the requisite 4% fail mark.

* Smiler: To help people give up smoking, a new treatment puts the patient into a trance, and by the power of mental suggestion replaces the desire for nicotine with one for invading Poland and hiding in a bunker in Berlin. It's called Hitler Therapy.

Vote-me-up! A free sporting massage for every tenth voter! Will it be you? God, I hope not.
Posted by Alistair Coleman at Thursday, May 10, 2007