Topsy and Tim: A re-appraisal for the 21st century

Topsy and Tim: A re-appraisal for the 21st century 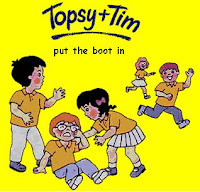 Topsy and Tim, if you are a non-breeder, is a series of unsufferably cheerful early-reading books for kids just learning to read.

The books feature the eponymous nursery-age two-some getting up to all sorts of happy-go-lucky adventures in what is clearly the white middle-class suburbs of a town where it is still 1960 and single parents are stoned to death as witches.

First appearing over forty years ago, the books have only recently been updated to feature a more inclusive politically correct outlook, where the stories now feature wholesome encounters with racial minorities and little buddies in wheelchairs.

While this wholesome idea can only be applauded by parents whose little darlings aren't quite ready for the latest Irvine Welsh, the outlook is still horribly, horribly white middle class all's-well-that-ends-well cute fluffy bunnies. And where's the fun in that?

It is time, we thought, that the series was dragged kicking and screaming into the social realism of the early 21st Century post-Blair society, where early readers need to be taught the sharp edges of the world around them, rather than wrapping the poor darlings up in the bubble-wrap of political correctness.

Some new titles, then. The Scaryducklings made up some of these. I truly am going to Hell:

And why stop at Topsy and Tim?

You know what's coming next: suggest-me-up!
Posted by Alistair Coleman at Tuesday, May 15, 2007