Mirth and Woe: The Weaponry of the Science Lab

Mirth and Woe: The Weaponry of the Science Lab 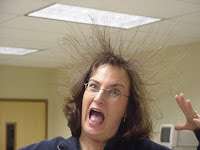 The school science lab. A place anyone with an ounce of imagination will tell you is a veritable arsenal of mirth, woe and dreadful, dreadful pain.

In short: a temple of excellence.

* Gas taps and lengths of rubber tubing become superb flamethrowers resulting in permanent scarring, dreadful melty fumes, and in one memorable case, where the poor victim's schoolbag was plumbed directly into the gas supply, a raging inferno.

* A tripod, otherwise useful for all kinds of dull experiments, heated on the blue flame of a Bunsen burner becomes an excellent brand. Your brand new attaché case, a present from a proud aunt as reward for excellent exam results is as NOTHING without the all-important triangular scorch mark.

* A bit of crafty squirreling (best done out-of-hours as *cough* a member of science or camera club) can pocket you an enviable collection of dangerous chemicals, with all the magnesium ribbon in the world wreaking awful havoc when ignited at just the wrong moment. During a German exam, for example.

However, you cannot discuss science lab weaponry with referring to the heavy guns: the Van Der Graaf Generator.

Girls liked the Van Der Graaf generator because it made their hair stand on end, and - we, as lads of the world suspected - made their mimsies tingle in a way we could only imagine. This was, we surmised, why there are so many female lab assistants. They only went for the job for the out-of-hours Van Der Graaf mimsy action.

For boys, it was a killing machine.

Although limited in its range by the fact it is such a huge piece of kit, the more resourceful classroom slacker is able to get round this with the use of a long piece of heavily insulated wire with which to zap unsuspecting victims with millions of volts of raw electricity*.

That, or steal the generator and its trolley, and wheel the thing about until caught red-handed by Dr "Tucker" Jenkins, our school's Aryan Overlord of the science department.

He had ears which stuck out and sung "Zap me! Zap me!" across the lab.

On any given day, the Van Der Graaf would sit forlornly in the corner of the lab, sitting on its trolley under a torn vinyl cover. But as soon as "Donkey" Delaney's back was turned - usually lured away on desperately important Chess Club business - we would spring into action.

The cover would be whipped off, leads connected, and immaculately drilled as we were, Ju-Vid would already be cranking at the generator's handle. Which, to be honest, made a refreshing change from cranking his own.

Frantically cranking away we sneaked up behind our victim, as best you could when there are six of you and a whirring piece of scientific antiquity, and watched with glee as a six-inch spark connected with the target, who would then need to be peeled off the ceiling.

And this from a boy of a stout, religious upbringing whose mother would certainly have had him exorcised if she heard him using such filthy language.

And just as the last FUCK sprung from his lips, in would come Donkey Delaney on a tide of dandruff, all mysteriously stained lab coat and trousers halfway up his ankles.

"RIGHT! Who's swearing in my class?"

And there we sat, like angels, as he stared at us through NHS glasses held together with sticky tape. Like absolute angels, right up to the moment Donkey left us alone for a quick bout of en passant.

"OUCH Leave me alone OUCH you bunch of OUCH cunts!"

"Crook! I'll see you after school! That'll teach you for your fucking profanity."

At the end of term, his ears resembled two pieces of burned bacon on the side of his head.

Of course, it all had to go wrong sooner or later.

Ju-Vid: "I'll give 50p to anybody who can touch the electrode to their cock."

He looked at us with that evil, wide-eyed look of his. The kind of look that would have any kid labelled ADHD these days. In that innocent age before performance targets and league tables, he had just one label: mental.

Round and round went the bloody great wheel, as the monster throbbed to a crescendo.

Words of despair that remain with me to this day, dear reader.

If there had been a hedge present, I dare say he would have been sick in it.

After the ambulance had carted poor 50p-richer Ju-Vid away for psychological reports, we were told to stop.

* As opposed to the cooked variety that comes out of taps.