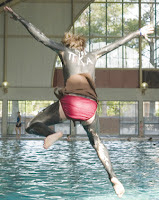 For some reason that defies logic to this day, our school used to drive us all the way to Guildford to use the municipal swimming pool.

There was a perfectly good one in Reading, not to mention several in towns en route to the admittedly spectacular facility, but no school trip anywhere could possibly be complete without a mystifying detour into Surrey for a bit of a swim.

Thinking about it through the fug of time, It was quite possibly the superior quality of the female lifeguards, who all went on to future careers as members of Colonel Qadaffi's elite all-female Amazonian bodyguard. The manky old bastard. But then, if I was the dictator of an oil-rich North African country, I too would insist on the same treatment. Oooh, mama!

On any given Friday evening, we would turn up in our school's converted ambulance (all the seats, stretchers an' stuff ripped out and replaced with two benches from the school gymnasium) and plunge headlong into the pool.

The one thing, it had to be said, that the Guildford pool had going for it was its positively huge diving board. The board in Reading was apparently Olympic regulation, but in Guildford, they had thrown the rule book right out of the window and had built something rsembling those they have at funfairs for the stuntman diving into a glass of spit.

Up, up up, you would climb, wet feet on metal and wooden rungs, breathing heavily as the air became thinner with altitude, head spinning as you looked up the chuff of the girl in front of you. And if you were lucky, you'd be catching a glimpse of Tracey's spider-legs, seconds before you plunged to your horrible doom, clutching an unexpected and inappropriate boner.

The whole reason you were climbing up to the top board somewhere in the stratosphere was, as you might expect, to impress the opposite sex. If not the Amazonian lifeguards, absolutely anybody of the female gender above the age of consent that still had their own teeth. Even then, one or two of our number weren't particularly choosy about upper age limits or dental records.

Eventually you would reach the top and peer nervously over the edge. The water seemed a long way down, and the noise of the rabble splashing around in the main pool echoed painfully around your ears as you decided whether to jump or not.

"No, you go first," you say to a fellow diver, and you'd watch him take a running jump and dive stylishly into the water below, if you still dared to look down.

What the hell - girls to impress. Run up, scare yourself stupid at the last minute and fall like a huge git off the edge, throwing a number of unusual shapes on the way down before landing on your arse, not realizing up until that moment that water could be so fucking painful.

I thought myself lucky to escape with my life, and went back for more, the backs of my legs spanky-red from the last effort.

Paralysed with fear and forgetting the wizened old harpie he was trying to impress, filled to the brim with the contents of the sweet shop at the end of his road, he peered into the brightly-lit void from the top board, clinging for all he was worth to the safety rail.

"Jump Gaz, you spacker!" the mob shouted, offering the only kind of support that 15-year-olds could manage at times like this, short of pushing him off the board.

"Tracey's watching!" they continued, hoping that temporarily raising his standards would be encouragement enough.

Eye-witnesses reported Gaz mouthing the word "Noooooo!" before he made a run for the ladder and the relative safety and only minor humiliation of the lower boards.

Alas, he never made it to the ladder, as there were others making their way up to the top deck. So he did the only thing that a nervous, bloated young man could do in the circumstances.

Alas, I was one of those coming up the ladder, looking in the general direction of up Tracey's wonderful peachy bottom, I took a shower of rich, brown chunder in the face, saved only from a Mr Creosote-style deluge by the shade provided by her magnificent bosom.

One of the Amazonian lifeguards had seen poor Gaz's humiliation, and the entire pool turned to see the scrawny teenager yarking over the side of the diving board onto a screaming girl and and equally screamy young man.

I'm not proud of my performance that evening, but in the name of the confessional nature of these pages it is only right that I tell you this: I screamed like a girl, and the Amazon wouldn't let me dive into the pool to clean myself off, so Tracey and I screamed even more.

Poor Gaz hadn't quite finished. Ushered out of the pool complex by hideously embarrassed teachers, it appeared that he might have actually come down with something rather more serious than a dose of top-board fear, for as we were just getting onto the bus, he announced a sudden an rather urgent need to take a crap. 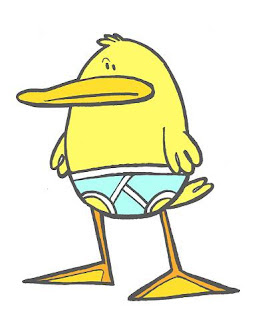 Nothing for it - we were too far down the wrong end of the car park, so he crouched down behind a huge municipal rubbish bin and did his business into a plastic bag. Or he would have, had the business not been more liquid than intended, the brown laser finding his pants and the back of his trousers with unerring accuracy.

Turds everywhere, there was no way he was getting on the bus.

"There's no way you're getting on the bus", said Mr Wilko to the general agreement of those of us who had made it onto the transport without getting puked on again, "and get rid of those pants."

So he did. He flung his soiled grundies across the car park, where they stuck with a damp splot on the windscreen of a brand new Ford Escort.

A towel was wrapped round his nether regions, he sat down one end of the bus, while a dozen huddled up the other end, away from the stench.

We never went back to Guildford, ever.

And yes, we realize it IS still illegal to stop on the motorway, even if it is to shoot liquid turds out of the back door of an ambulance. But it was for the greater good, you understand.
Posted by Alistair Coleman at Friday, May 25, 2007