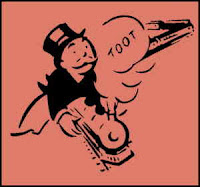 This weekend, our house has echoed to fevered shouts of "RENT!", "The Angel Islington - that's six of the Queen's pounds, sucka!" and "Jail! Go to JAIL!" in the kind of voices that are only usually reserved for the inquisition into who trod one of Lucy Minogue's dog eggs all over the kitchen floor.

on the joy of the world's most evil board game, we have gone out and bought our home's first ever Monopoly set. A move which has put an end to our household's Scrabble fetish, and draws a veil over such arguments as to whether "CUNTED" is a real word or not.

I thought, up until this weekend, that I had lovely, thoughtful, generous children. And not, as I have just found out, dreadful, scheming, grabbing little gits of a ruthless Machiavellian bent who would take both their dear old parents for every last penny they own.

In fact, worn down by Scaryduck Jr's ruthless development of the Dark Greens - the only three properties he owned - I was soon bankrupted, handing over my jealously-guarded Old Kent Road ("Ha! Two quid! Pay up!") and Water Works to a grateful eleven-year-old bedsit baron.

"Have a tip", the patronising sod said, riffling a small wad of 500s, generously handing me the one pound that kept me in the game until the next turn.

We had, in a fit of nostalgia, splashed out on a price-reduced replica of the original 1935 set in a nice wooden box, complete with the original none-more-brutal Community Chest cards:

"Go to the nearest railway station. Pay double the rent owed to the owner."

"That's 400 pounds, please Dad," smiled Scaryduckling, taking my last pound note from my sweaty palms, "You can owe me the rest in real money."

Gah! Bankrupted by my own short-term wheeler-dealering, for it was I who sold her Liverpool Street in the first place. Would I ever learn?

Three hours later: "So, that's two thousand pounds, whatever I want for the next three Christmasses and a new bike you owe me."

Answer: No. I will never learn.

Monopoly corrupts. Monopoly corrupts even the most innocent minds. I'm going to win my money back next week. Double or quits, just you see.
Posted by Alistair Coleman at Wednesday, May 16, 2007