Life in a Day

Life in a Day 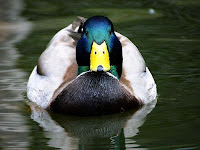 Things that happened. Envy my life:

• I saw a duck the other morning on the way to work.

It flew up to me and said "Quack", before waddling off.

What can this mean? Apart from "Stay away from my wife, you weird case".

It is a portent. A portent of having my faced pecked off by an angry duck.


• The dog has never been quite the same since we had her shaved, cut her head off and transplanted it onto the body of another dog.

The verb "To dance" has now taken on a whole new meaning in our household, in much the same way that the phrase "Does she know he's Zorro?" has become a familial byword for dopiness. It's a long story.


• The shocking discovery that Scaryduckling has a) her own MySpace page and b) Lily Allen as a MySpace friend.

"Feh", I say to this discovery: "Feh". The single greatest thing that has ever happened to me, EVER, is Gary Numan adding me on MySpace. GARY. FUCKING. NUMAN. I bet he's not like that slapper Allen. I bet he doesn't add just anyone. Does he?


• I would also tell you about The World's Stickiest Bogey which fell into my possession this morning via, but that would, I fear, prove to be far too much information for you to ...err... swallow.

I am happy to let the World Record remain with Toxteth O'Grady, USA.


Trapped as I am today in a work-sponsored training seminar that will have vital repercussions for the world we live in and life in general, it might be a wise idea to leave the Thursday vote-o in your more-than-capable hands, light the blue touch paper, and leg it. Vote then, on the following terrible trio, in which at least two of the vote-o quote-os from the House of Lies contain traces of truth:

• Doctors and Nurses: "Supermarkets only sell eggs because the manager is being held hostage by chickens as part of some dreadful pecky protection racket"

• Grand National: "Women only nag their husbands to do the housework because in reality they don't know how to work the vacuum cleaner and are convinced the washing machine is the work of witchery"

• The Weaponry of the Science Lab: "To save time, all TV news bulletins are recorded the night before"

On this, the day of UK local elections, I fully expect electoral fraud on a Nigerian scale. Multiple voting, intimidation of voters and massive bribes. Democracy is over-rated.
Posted by Alistair Coleman at Thursday, May 03, 2007