Neither Mirth Nor Woe: Pied Piper

Neither Mirth Nor Woe: Pied Piper 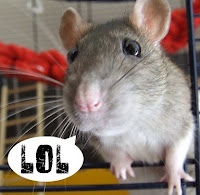 Our music teacher fancied herself as a bit of an Andrew Lloyd Webber. So she did away with that whole old-and-busted Nativity Play thing and made us do a musical she had written herself for the Christmas concert.

It was the Pied Piper of Hamelin, meaning that the 95% of pupils who couldn't sing or dance could be dressed up as a rat and flung into the river, thus ensuring the presence of every single ticket-buying parent for the big night.

The part meant running about and squeaking for the main part, but the evil old bat wasn't letting us go lightly, and gave us a song.

Stage fright? Not much. I was terrified, and demonstrated this by singing my line about cheese theft at the wrong time and being told to "Shut up, you spastic" by Judith who was playing the Baker's wife and had a voice like a foghorn. This got the second biggest laugh of the night.

Not as terrified, however, as one of the other members of the rat chorus who lost control of his bladder as we sung, and stood in an ever-growing circle of his own urine at the back of the stage.

Alas, nobody else noticed until the end of the rats' chorus song, when we were supposed to go "Eek Eek!" and run off, stage right.

The first rat slipped in the pool of piss, and everybody else, their vision restricted by their rat masks, went over like so many skittles. Tearful piss-soaked kids, juvenile swearing, and Mrs Carragher with her head in her hands as her attempt at West End stardom turned to so much dust. The biggest laugh of the night.

Sadly, this was an age before video cameras and You've Been Framed, so I reckon I'm £250 down on the whole deal.

Then I was sick inna hedge.
Posted by Alistair Coleman at Friday, April 24, 2009