Today's post is rather lacking in teh funnay, and for good reason. Normal service resumed tomorrow. 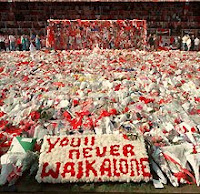 I was at the Arsenal, standing about a third of the way up the old North Bank, just to the right of the goal.

I had a couple of pints in the Tavern, sold a few copies of The Gooner fanzine, paid the ridiculously small entrance fee at the turnstile, bought a programme and settled down in a group of half-a-dozen regulars to watch the boys take on Newcastle United.

Arsenal were coughing and spluttering their way to their first title in 18 years, Newcastle - as usual - were fighting relegation.

We won 1-0, second-half goal from magic winger Brian Marwood, having the season of his life.

But, by then, it hardly mattered at all.

By then, we were hearing news of something dreadful happening in Yorkshire.

Liverpool were playing Nottingham Forest in an FA Cup semi-final. The crush of fans arriving late for the game was too much for the Leppings Lane terrace, the police froze, and ninety-six football fans perished in the awful scenes that followed.

We'd all stood, at some time or another, on a dodgy terrace, swaying to and fro with the crowd until jammed behind a barrier. We'd all had one or two near misses, had a few pints after the match to laugh it off.

This time, those Liverpool fans didn't get away. Ninety-six. That's an awful lot of young lives to snuff out in one day.

On the way home from Highbury, already shaken to the core, I was (innocently) involved in a motor accident. It was all I could do to pull over to the side of the road and cry my eyes out. Twenty-three years old, like a baby in a layby just outside Reading.

Twenty years later, Hillsborough is a scar that still runs deep in Merseyside, not least for the botched policing, the unspoken establishment view that "they probably deserved it" and the lies that emerged in The Sun newspaper in subsequent days.

Nobody deserves to die like that, not at a football match, not anywhere. I've seen violent death first-hand, and, frankly, it ain't pretty and I don't plan on seeing it again.

As you can see, Hillsborough still makes me angry, even to this day.

Angry, but proud to be a football fan. We pulled together. We bought a (dreadful) charity single. The minutes' silence at the first post-Hillsborough match (a 5-0 demolition of Albania in the World Cup) was perfect. We remembered, always.