One thing led to another, and I've gone and written another idiot letter to the editors of my favourite local newspaper, Weymouth's very own Dorset Echo.

I was too busy bowking up rich brown vomit on Monday, so I may well have missed it if they were desperate enough to publish my latest work of madness. Which they probably were. 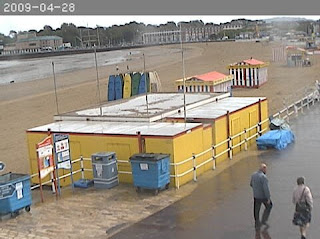 As the recession bites ever deeper, we are living in times where image is everything. Weymouth needs to at its best for the thousands of extra holidaymakers who are expected to forsake their foreign holidays, and instead plump for a summer break in the UK.

Any blemish on our reputation could see tourists giving up on Weymouth and seeking out other, lesser, resorts. Such as Bournemouth, for example. Is that what we want?

Why then, when the Borough should be seeking to cement its place as a top UK beach resort, does the Council's beach webcam - tinyurl.com/weycam - point at a bunch of shabby temporary buildings and a gaggle of sad-looking rubbish bins instead of our wonderful golden sands?

I could, of course, be completely wrong. Did I miss the launch of Weymouth's new money-spinning tourist attraction - Terrapin World incorporating Bin Land - a rollercoaster ride (rollercoaster not included) around the world of refuse collection and temporary buildings? Who needs the Eden Project when Weymouth has top-draw stuff like this?

If I was on the council, I'd slap another 10p per hour on the car park charges to cash in on the expected rush. Or simply put an end to this Premier League muppetry and point the camera at something rather less shabby.

PS I am not mad

PPS My friend "Spikes" Walker says the bins and sheds are hiding Weymouth's very small and roped-off nudist beach. Is this true? If yes, I demand their removal IMMEDIATELY
Posted by Alistair Coleman at Wednesday, April 29, 2009

Email ThisBlogThis!Share to TwitterShare to FacebookShare to Pinterest
Labels: dorset echo, I am not mad, idiot letters, Weymouth