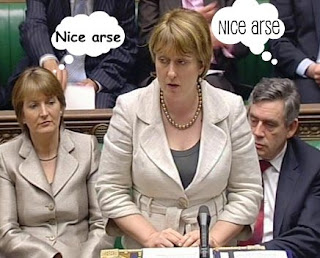 There's nothing so dull as reading about other people's dreams.

In which case, you'd most certainly not want to hear about my night tossing (heh) and turning while the darkest sewer of my brain served up the worst nightmare ever.

It was a nightmare that had me running the crèche at poor, dead Jade Goody's funeral, Charlton Heston reading the eulogy, whilst the England football team wrestled with the cast of Emmerdale in a paddling pool full of baby oil.

You're right, you won't.

And I have found out that it is perfectly possible to vomit in your sleep.

Then I woke up and my pillow was gone.

Having heard all that, you probably would not be interested to hear of the dream that haunted me the following night.

Quite horrifically, I found myself a TV repairman called to a large house in central London. I ring the doorbell and find myself in the company of scantily-clad, arse-faced Home Secretary Jacqui Smith.

"They let you keep the whip when you stop being Chief Whip, you know."

It was at that exact point that I realised it is STILL perfectly possible to vomit in your sleep.

Then I woke up and my pillow was gone.
Posted by Alistair Coleman at Wednesday, April 08, 2009