So, you're asking yourself, what's our pal Samuel Pepys up to these days? Aside from being dead, this: 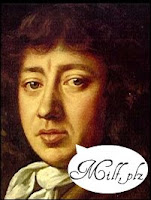 3rd April 1660: Office day. Meetings, the scourge of modern civilisation, where otherwise learn'd gentlemen sit in a room for six hours, half dozing while the other argue over concepts that none understand. My Lord Downing is rather badly inflict'd, resorting to such meaningless language as "solutioneer'ng", "low-hang'ng fruit" (despite the conversation be'ng on the subject of Naval Estimates) and "swimm'ng outside the think-tank" He has been over-work'ng of late, and I fear for his sanity, especially after he had Luellin dragg'd out and flogg'd when he stood up and shout'd "Bingo!".
Alas, woken from my post-luncheon reverie, wearing a pair of spectacles – a gift from Newton – with eyes paint'd on the lenses, by My Lord declar'ng: "So, it is agreed. Pepys shall carry out this essential, yet life-threaten'ng task. May God have mercy on his poor, doom'd soul." Glanc'ng at the official minutes after the fact, posterity records my reply as "Fuck'ng Hell." Action points: Pepys: Kill'd to DEATH, Luellin: Arrange funeral.

4th April 1660: Office day, spent mostly with Luellin playing Spot-That-Wigge from an upstairs window in White Hall, before a note came from My Lord Downing detail'ng my heroic task for HIS MAJESTY THE KING, viz: to draw some £26 s13 d11 from the Treasury to pay off some naval vessels now dock'd at Dover, with their men anxious for their gold. "Do not", sayeth My Lord, "on pain of DETH, take that wretch Newton with you, for it will be yr undoing. "With bandits and round-heads on the Dover Road, my throat is as good as cut, Luellin said. Also, sire, he asks, can I have yr desk by the window?

5th April 1660: Up betimes. After much preparation, purchas'ng of horses, hir'd goons &c, drew £26 s13 d11 from the Treasury and rode for Dover to pay off the ships. By complete and utter coincidence, ran into my olde and best friend Newton on the Old Kent Road, and he is, by complete and utter coincidence, also travelling to Dover on a Royal Mission to complete a national survey of ale-houses and brothels, a task for which he is more than adequately equip'd.
Stopp'd the night at a place in Maidstone of Newton's acquaintance, which he mark'd six-out-of-ten, for it was sadly lack'ng a milf option.

6th April 1660: Twas on the road to Dover that we stopp'd at a likely inne for lunch. There, our food (a pie which contain'd braines of some sort) was prepar'd by a man no taller than a dozen palms high (about 3 feet). Cld not help tell'ng him this was possibly the worst pie I had ever eat'n and would damn his miniature breeches if I were not the kind of person to strike those smaller than myself. He had no such qualms, assault'ng me around the gentleman's area with a skillet, before tell'ng me – at length – of his plans to open a number of similar innes staff'd by those of smaller stature, all nam'd after himself.
"What?" I finally expound, "Little Chef?"
He hit me around the gentleman's area once again – thoroughly wreck'ng any hope of enjoy'ng the company of a slattern that evening – before scream'ng "My name's McDonald! Ronald McDonald!"
We scoff'd at his idiotic dreams, and left on the Dover Road, where I did puke rich, brown pie into a hedge as we near'd Canterbury. Need'ng to settle our constitutions after such an ordeal, stopp'd the night at a place in Canterbury of Newton's acquaintance, which he mark'd six-out-of-ten, for despite hav'ng a milf option, sadly lack'd a fat girl

8th April 1660: Lord's Day, so unable to conduct business at the Navy Office, as it would be an affront to the faith and BLASPHEMY. A messenger brings a note to my rooms at Madame Eva's Emporium of Polish and Lower Silesia. It is from my lovely French wife, for I recognise the hand-writing immediately. My darling Samuel, it reads:

First of all: Fuck you.
That's right, fuck off to Dover with all your precious Navy boys and leave nothing in the house except crumbs in the pantry and a turde the size of Whitehall in our marital bed. Don't be surprised if I run off with the footman by the time you come back.
Go fuck yourself.
Elizabeth
PS Downing called. He said that if you're in Dover with Newton, you're fucked.

How I love her and her shining wit! And so to bed, Madame Eva and the donkey provid'ng stimulat'ng company

9th April 1660: Up betimes and finally to the Naval Office to pay off the ships. Word hav'ng got around that we are in town with the gold, quite a queue has already form'd, compris'ng swarthy matelots of all descriptions, temper and sobriety. Report'ng to the Port Admiral, there was a short ceremony, the read'ng of the new articles of war, and the passing round of the grog ration which made the whole affair even more raucous than it should have been.
Then, I had two of my hir'd goons bring up the great chest contain'ng £26 s13 d11, and with the words "My boys! Here is what your great country thinks of you!" Before fling'ng the lid open for all to see. Arse.

10th April 1660: At sea. The chest contain'd naught but a note reading "IOU £26 s13 d11 LOL S. Newton, Esq" and a number of woodcuts depict'ng sexual acts too deprav'd for this diary. Of Newton, and My Lord Downing's £26 s13 d11 there was no sign, but until they are seen again, I am assur'd that I shall be act'ng out the woodcuts all the way to the Indies and back again. Still, the sea air will do me good, one hopes.
Posted by Alistair Coleman at Monday, April 20, 2009