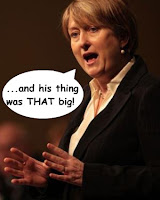 I don't post much about politics these days – simply because there is hardly a rich seam of TEH FUNNAY to be had from our betters these days. But something's got to be said about Wacky Jacqui Smith.

Home Secretary. One of the great offices of state. Previous post holders include such great statesmen and leaders as The Duke of Wellington, Palmerston, Churchill and Lloyd George.

Now they give the job to any drooling imbecile they can entice in from the street with a roll of fivers tied to a length of fishing line.

Jacqui Smith, whose qualifications for the job seem to be that she can write her name without spelling mistakes four times out of five.

Living in Gordon Clown's ZaNu LieBore "Will The Last Person To Leave Turn Out The Lights" Britain (© Richard Littlejohn, Daily Mail), we've come to expect a certain blazing incompetence, but Jacqui has taken the bar and raised it far, far higher than any of her predecessors.

Yes. We've all done it. And some of us have even blamed spouses when caught.

But the whole episode beggars the question - and therefore the whole fitness for office of Ms Smith: What in the name of blue fuckery are you doing PAYING for pornography?

And now she's gone and over-compensated. Realising there's an entire internet full of free-to-air filth, she's tasked her pals at GCHQ to go and find it all for her, under the spooky name "Mastering The Internet".

Oh yes. Seen through that one already. Master-bating The Internet, more like.

Caught again, Jacqui. Caught like a Treen in a disabled space cruiser.

You'll be pleased to hear that the entire situation is the result of a bet by the Shapeshifting Lizard Freemason Illuminati Elite to get a Home Secretary that is worse than the one before, all done entire for the LULZ.

Take a look at the recent list of incumbents if you don't believe me:

Next in line for the job is a Hostess Trolley from the John Lewis list.

Alternatively, turn up at any Cabinet meeting and utter the key word "Wibble" and the job's yours.
Posted by Alistair Coleman at Tuesday, May 12, 2009

Email ThisBlogThis!Share to TwitterShare to FacebookShare to Pinterest
Labels: a little bit of politics, Jacqui Smith