On things which are 100 per cent of truth

On things which are 100 per cent of truth

Scaryduck's "Did You Know...?" No 34,091
Footballer David Beckham is known as 'Goldenballs' to both his legions of fans and an unimaginative tabloid press. However, the sobriquet has nothing to do with any alleged footballing talent, but relates to a teenage masturbatory accident involving a tin of spray paint that was documented in a 1989 edition of the Barking and Dagenham Post.

Scaryduck's "Did you know...?" No. 56,022
All penguins are naturally inclined to join organised crime gangs. The first penguin to join the mob was "Genial" Harry Fishfinger, attracted by a promise that he would be "sleeping with the fishes", but ending his days on a life stretch for wanton acts of violence against puffins. 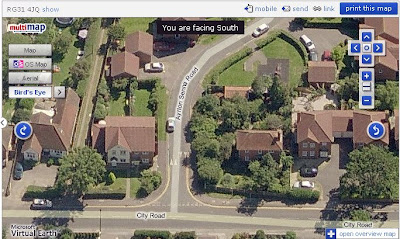 Just to prove it, here's a bird's eye view of Ayrton Senna Road in Reading, built as a fitting tribute to the world's greatest racing driver, not terribly far from where he had a home. (Click on pic to embiggen)

The more eagle-eyed amongst you will note that a) it's a cul-de-sac and b) yes, those are speed bumps. Poor, dead Ayrton.
Posted by Alistair Coleman at Tuesday, December 08, 2009

Email ThisBlogThis!Share to TwitterShare to FacebookShare to Pinterest
Labels: 100% of TRUTH