The first blow is cast. Once again, what started as a one-off gag egged on by fellow internet lunatics has taken over my life with new websites, email addresses and authentic-looking press releases. Let's see how far this little beauty goes... 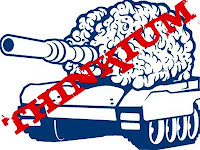 Renowned for its out-of-the-box analysis, THINKIUM urges both world governments and citizens to take urgent and direct steps in order to combat the threat of rising global temperatures and sea levels.

Scientists engaged by THINKIUM note that global warming only became an issue AFTER the banning of Chlorofluorocarbons (CFCs) in hundreds of millions of refrigerators around the world.

Logic dictates, therefore, that CFCs – the very substance that makes things cooler – should be immediately un-banned by world regulatory bodies in order to reverse the indisputable rise in global temperatures.

Citizens are also urged to help this process of "Global Cooling" by leaving their refrigerator doors open for three hours per day.

Additionally, pensioners who cannot afford to run their central heating should simply leave their doors open at night to let the cold out.

A MESSAGE FOR THE COPENHAGEN CLIMATE CHANGE CONFERENCE

In the light of this simple, elegant solution, THINKIUM disputes the need for the expensive, environmentally damaging Copenhagen Conference, and proposes that drastic measures are taken to offset the carbon dioxide generated by 60,000 people travelling to Denmark.

THINKIUM scientists have calculated that these 60,000 visitors, once humanely despatched, will provide 3,900 tons of prime fertiliser, or to put it another way, enough fresh, red, iron-rich mulch to grow nearly four million trees.

This solution provides answers to many of the questions surrounding climate change: over-population, deforestation, pollution due to excessive air travel and taxpayers' money wasted on useless research grants.

THINKIUM supplies answers to the world's most pressing crisis at both the governmental and societal levels, and if employed immediately, will provide benefits for entire populations.

THINKIUM: "We say what you pay us to say"

THINKIUM is an independent, privately-funded Think Tank with a select client base. Members of THINKIUM are available for analysis, comment and policy direction on matters of governance, law, society, science, faith and environment.