On moving to the sex capital of the world 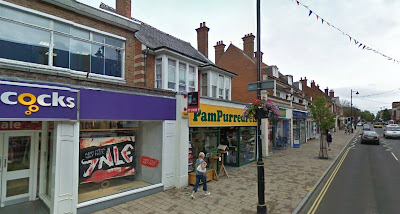 Many years ago, I used to walk the streets of Reading by day, trying to find these bored housewives I'd heard so much about. Unfortunately, my only source of research was the letters page in Fiesta, the gentlemen's magazine of choice, which was - in hindsight - liberally sprinkled with fiction. I got nothing except sore feet.

It also turns out that maybe people from Reading aren't really that interested in The Sexy Time. Perhaps they really do spend their days at coffee mornings, followed by a Zumba class and a couple of hours working at Airfix kits. I do not know, and I probably never will. In fact, I am pretty certain that Reading was turned down for city status by the Queen due to the abiding memory of a particularly disappointing swingers' party in the town.

But now I have moved a safe distance away from Reading to the not-bustling-at-all metrpolois that is Fleet in Hampshire. A town where half the shops are empty, the streets eerily quiet and what people you see are perennially tired and in a state of partial undress.

Why - I ask - might this be? And it was the chance spot of a story in the Fleet News and Mail weekly scandal rag: Sex shop proclaims Fleet sexiest town in UK. And I quote:

"FLEET has been named the ‘sexiest town’ in the whole of the country with randy residents spending triple the national average on bondage items.

The findings from online sex shop Love Honey also reveal that Fleet people lash out the most on naughty knickers and sex toys, spending double the national average.

Residents splash out six times more on spicing up their love lives than people in Sunderland, which was declared the UK’s least sexy city."

And, on closer inspection, it's all falling into place.

- The only Starbucks in the country with beds and handcuffs

- A man on a street corner, selling cucumbers by the foot

- The local branch of Robert Dyas in the Guinness Book of Records having sold 10,000 AA batteries in three hours

It goes on and on. Literally.

Also, I finally understand the knowing wink from the milkman when I asked for an extra yoghurt, the filthy pervert.

I might have to go for a walk. Nowhere in particular...

NINJA EDIT: It has been pointed out to me on Twitter that Fleet is a "one horse town, with a three year waiting list for the horse". Quite.
Posted by Alistair Coleman at Thursday, April 26, 2012