On Conspiracy Theories and Chemtrails 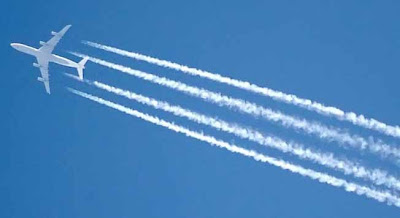 Not because I'm into them or anything, but for the sheer lunacy and brass-necked ignorance that drives the believer onward in their certain knowledge that somewhere, somehow, THE MAN is out to get them.

Why, yes, I've got favourites, and they are a never-ending source of glee as very committed and (sometimes) otherwise intelligent people tie themselves in knots over whether George Bush organised 9/11. Here's a truth, Truthers: George Bush couldn't organise a toddler's birthday party, let alone stage a terrorist attack that killed thousands without leaving any evidence whatsoever.

And that's where conspiracy theories fall over: Shit happens. Princesses die in car crashes, bad people set off bombs, men walked on the moon, and - believe it or not - aircraft contrails are just water vapour.

I've only just discovered that the "Chemtrails" conspiracy theory is An Actual Thing. According to tinfoil hat-wearing maniacs, THE MAN keeps humanity obedient by spraying us with mind-controlling drugs released from aircraft at altitude.

Other chemtrail truthers claim it's all a US plot to poison us all with toxic metals all in the name of profit. I've even seen petitions on the internet about them (because if there's one way to tell THE MAN you're really on their tail, it's through a petition signed by yourself and 29 others). All use long, scary words like "geo-engineering" because THE MAN is trying to change the planet and he doesn't care if you live or die.

Even though THE MAN is also poisoning himself while doing it.

For your delight, here's an actual quote:

"The planes that do this always seem to be entirely white, they do not follow the normal flight paths of most commercial airliners, if this is some sort of geo-engineering then surely the population of Earth have a right to know just what is going on exactly. This is only a modern phenomenon, I have always been the outdoor type and can definitely confirm that the skies were never like this 20 or more years ago. Please, please will someone find some answers to this apparent spraying. An angry and concerned citizen of this planet." 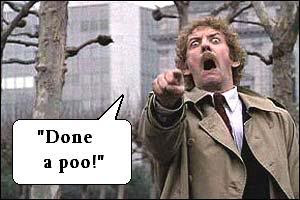 As my homeopath said, the chemtrails contain very small particles of airplane, with the plane having passed through the vapour before it being visible to us.
The government is trying to shower us in tiny planes, to make us immune to air travel to help with global warming.
It makes sense when she explains it.

Black helicopters were used to hunt the astronauts who escaped from the mock-up of the universe's surface at Mission Control. There was a documentary on TV about it a few Xmases ago but I think that all the video copies have been destroyed.

Pseudonymph
So that's why the boffins named the de Havilland Comet and the Gloucester Meteor.
Makes sense now.

It's all a load of poo! When someone goes for a crap on a plane and pulls the chain, the little door opens and it rains harmless shit all over us. Nothing to it!

My grandad told me that when he was a lad there weren't vapour/shit trails from the Tiger Moth biplanes, they all had outside toilets installed so you didn't have to flush them.