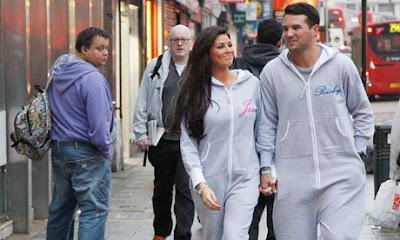 Not terribly long ago one major supermarket caused a few ripples by banning shoppers who turn up wearing their pyjamas.

Fair play to them. If you can't be arsed to get dressed, you shouldn't be allowed out in public. And that includes driving your offspring to school and kicking them out of the car at the school gate. Every other bugger's got clothes - why not you?

However, the recent trend for onesies - one-piece zip-up suits popularised by the orange-faced Satans at The Only Way Is Essex* means that this ban should not only be widened to include all public places, but should be enforced by fatal force if need be.

Now, I'm not advocating lynch mobs going out and stringing up some onesie-wearing buffoon who made a fatal error of judgement by deciding to hang around the shopping precinct in what is essentially novelty nightwear. That's a job for the forces of law and order, who are able to open fire once a reasonable number of warnings** have been issued.

But when your sanity is shaken to the core by running into an entire family of Onesies in the Fleet branch of Waitrose, some of whom being actual adults who ought to have known better, you know it is time to write to your MP.

People who wear onesies in public: They're fucking pyjamas. Get dressed you slobs.

* Sometimes I miss poor, dead Jade Goody. Whatever her faults, she would have wiped the floor with these TOWIE and Made in Chelsea dullards

** One warning, mumbled, from at least two miles away
Posted by Alistair Coleman at Thursday, May 09, 2013

The onesies with the animal heads on are worse. I'm not getting on the fucking tube with a woman dressed like a giraffe.

Well said I quite agree, if there is onesie thing I hate its not being able to tell the difference between adults and babies.

You are quite right Rob Z Tobor, you are much more amusing. I find your inability to differentiate between your (possessive) and you're (you are), hilarious!