Neither Mirth nor Woe: Red Arrows

Neither Mirth nor Woe: Red Arrows 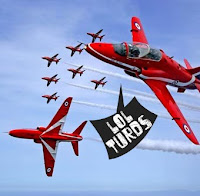 Wednesday to the park in order to watch the very fine RAF Red Arrows strut their stuff over the clear, blue skies of Weymouth Harbour.

We are not alone, for we gather around Henry VIII's cliff-top Sandsfoot Castle with a crowd numbering in the dozens to witness the annual spectacle with forms the climax of the town carnival.

OK, the sacrificing TO DEATH of last year's Carnival queen is the real climax, but that's an event open only to a select few. Said too much.

While tens of thousands cram into the town centre to watch the show, we select few go to the park, it being directly underneath where the Arrows turn on the proverbial sixpence for the next run up the beach, strafing the collected hordes of grockles with their 30mm Aden cannons.

So, why, I ask, has that woman brought her dog?

Pooch isn't your tiny little lapdog either. He's a monster of a canine of indeterminate breed, the size of a small pony, and rather excitable to boot.

The Arrows arrive with a roar.

"He likes to chase kites, you know."

He does? Oh good.

And so, our expensively-trained fly-boys steam overhead in their famous 'Diamond Nine' formation, and our canine pal takes off - entirely predictably - in hot pursuit.

I can now go to my grave proud in the knowledge that I have seen a grown, middle-aged woman dragged - head first and face down - through a turd-ridden park by a king-size dog out of his head on aviation fuel.

A woman dragged head-first through a vomit-strewn hedge to the cheers of approval from the watching throng.

And straight over the cliff, with nothing but the English Channel below. And sharks. Sharks with AIDS.

"That's it," said a filth-covered wraith emerging from the undergrowth as the Arrows powered their way back to Exeter, "I'm putting you in the car."
Posted by Alistair Coleman at Friday, August 28, 2009