On sorting out the Rozzers

On sorting out the Rozzers

It's a dangerous business, what with all those crims and hoodies out to get you.

It's also an expensive business.

Hiding from all those nasty crims and hoodies inside a police car with a coffee cup holder and a special place to keep your doughnuts warm – whilst saving loads in shoe leather – costs about twenty grand per vehicle.

What the fuzz need, then, is some way of staying mobile – and one step ahead of those crims and hoodies – that doesn't cost the Earth.

Something that gets Plod out of his motor, yet enables him to move at high speed but also maintains the smart, dignified demeanour that we have come to expect from our guardians of whatever the law happens to be this week. Eh, kids?

And I know what you're thinking. Give 'em all a bike, just like in the old days.

And you'd be WRONG.

Think about it. It'd be excellent. Police boots with built-in wheels.

They work for pre-teen kids in shopping centres – they've GOT to do the business for our friendly defenders of the law.

Pc Nicebody would be able to gently plod around his beat, doing all that knees-bend evenin'-all business, a friendly wave to Mrs Perkins and the twins, a smile to the old boy he helped cross the High Street the previous week. All in a day's work.

But as soon as Johhny Drugtaker, the Taliban's friend legs it with poor old Mrs Warboys' handbag, our hero would be straight into skate mode, setting after the crim as fast as greased lightning, whistle between his lips, calling on all his beat pals, and any concerned citizen that might want to partake in a jolly hue-and-cry.

Head down, half-running, half skating, our well-trained hero sets his sights on the worthless piece of pond-life that is breaking the Queen's Peace. A mighty roar of "Stop! In the name of Mega City! Armed Judge!" strikes fear into the heart of all who behold it. 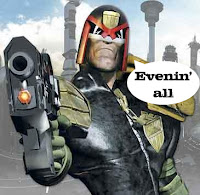 Then, grabbing hold of the back rail of a passing hover-bus, our intrepid defender of the law can wind the miscreant in hand-over-fist, giving him plenty of time to select the Hi-Ex round on his Lawgiver pistol, and blow the perp to kingdom come, before sentencing his entire family to twenty years in the iso-cubes for letting him bleed on the pavement..

For cops on Heelies.

I feel a letter to the Ministry of RIGHTEOUS JUSTICE coming on:

Cops on Heelies. Go on. It's a fucking winner.

Email ThisBlogThis!Share to TwitterShare to FacebookShare to Pinterest
Labels: helping the police in their enquiries, idiot letters, judge dredd