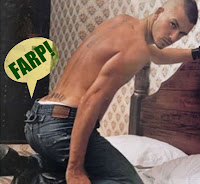 Model, celebrity, chat show guest, saviour of the universe. Some people even say that Beckham hides a secret life as an international footballer. But what do you know about David Beckham, the most famous man on the planet? (Behind some other, more famous people. Such as his wife, for example)

9. David has a tattoo on his forehead which reads "This way up". This is to help his wife dress him in the morning

8. David's son Brooklyn is named after the area of New York in which he was allegedly conceived. This carries on a long-running family tradition: His wife was born Victoria Coach Station Disabled Toilets Adams

7. Contrary to the urban myth, David Beckham has never turned up for training with a thermos flask containing two cups of coffee and an ice cream. David is a confirmed tea drinker

6. Professor David Beckham and his Ph.D qualified wife Victoria are undergoing a long-running experiment into the shallowness and vapidity of fame by painting themselves orange and wearing bug-eyed sunglasses. However, like that episode of Colditz that nobody can quite remember, observers fear that they have "gone native"

5. David's spell at Manchester United was marked by a stormy relationship with manager Sir Alex Ferguson. This sang froid was based entirely on the misunderstanding that the boss did not know his star midfielder's name, finishing every sentence with his habitual Scottish "D'ye ken?"

4. David is lined up to play the part of Del Boy in Tarantino's big budget, big screen remake of Only Fools and Horses. He's already memorised his line: "This time next year Rodders, we'll be motherfuckers". Victoria will play the horse

3. The only parts of "Beckingham Palace" not extensively photographed by Hello! magazine is the servants' toilet and the gap behind the wardrobe where David keeps a 1995 copy of Fiesta, in which - coincidentally - one "Dave" of Manchester has a letter about going next door to borrow a cup of sugar from a busty, divorced neighbour

2. David's extensive diplomatic experience led to his brokering a ceasefire in the 2008 war between Russia and Georgia, which was settled by the age-old device of "next goal wins it". However, Georgia has not accepted the result, claiming Spurs striker Roman Pavlyuchenko was in an offside position when he nodded home the winner

1. An avid reader of top-class literature, David lists Tolstoy, Chekov, Pushkin, Dostoyevsky and Dan Brown as his favourite authors. He particularly likes the way Brown puts all the important bits in italics, so he can read faster and without moving his lips

BONUS FACT: David's favourite Spice Girl is Sporty. Nobody's had the heart to tell him
Posted by Alistair Coleman at Thursday, August 13, 2009