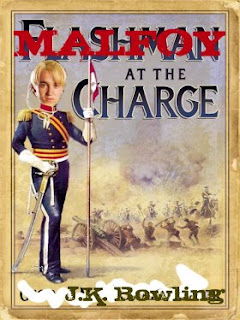 He's the boy wizard that everybody's talking about. But what does a muggle like you know about the one and only posh speccy do-gooder Harry Potter? Eh? EH?

10. "What happened to Flashman Malfoy the caddish bully from Tom Brown's Schooldays Harry Potter after he was expelled in disgrace from Rugby School Hogwarts? What kind of man grew out of the foul-mouthed, swaggering, cowardly toady who roasted Hufflepuffs for fun but howled when we was beaten himself? Follow his adventures as he joins the British Army and fornicates his way to Afghanistan and back." I don't know about you, but I think JK Rowling could be onto a winner with this

9. Little is known about the private lives of the teaching staff at Hogwarts. For example, headmaster Albus Dumbledore is only 35 years old. It's the endless cycle of swinging parties which are considered de rigeur in wizarding circles that makes him look much, much older

8. In a recent Ofsted inspection, Hogwarts was declared to be a "failing" school, with not a single GCSE pass in seven years, and the house system causing no end of bullying and hideous magical mutilations

7. Famous Hogwarts alumni include TV's Bob Monkhouse (Hufflepuff); the Rev Ian Paisley and Gerry Adams (both Slytherin); and DCI Gene Hunt (Griffindor). Despite claims to the contrary, Paul Daniels was expelled in his first week for dumping a truckload of fizzies in the swimming pool

6. Top student Hermione Grainger has been given the honour of presenting the Golden Snitch to the winner of this year's Quidditch World Cup. Unfortunately, due to a misunderstanding, she shaved the night before

5. Professor Snape, known in the school for his dour demeanour, couldn't be more different outside work hours, where he is the Indian in a Village People tribute band. Lord Voldemort plays the construction worker

4. Desperate to shake off its reputation for employing Defence Against the Dark Arts professors who turn out – with clockwork regularity – to be servants of the evil Voldemort, Hogwarts has unveiled the teacher for the forthcoming school year: Professor Dave Bin Laden, who promises his lessons will "go with a bang"

3. Hogwarts is known for its paintings that won't stay in their frames, staircases that move without prompting and giant talking spiders living in the woods. The Ofsted report had something to say about LSD in the school tuck-shop, too

2. What happened to Eddie 'Fitz' Fitzgerald, noted criminal psychologist and "Cracker"? Finding the sickening world of crime too much, he dropped out of regular life and took a job as a caretaker at a quiet boarding school. Unfortunately, you can never quite escape your past…

1. Author JK Rowling has angrily dismissed Church accusations that the Harry Potter books are somehow "anti-religious", pointing to the books' annual celebration of Christmas, and the scene in book six where Ron Weasley is nailed to a tree

Bonus FACT: Wizard Harry Potter has gone through life telling people the scar on his forehead is the result of a youthful encounter with Lord Voldemort. Wrong! It is, in fact, a paper cut from a copy of Fiesta Busty Witches magazine
Posted by Alistair Coleman at Wednesday, August 05, 2009