On putting the FUN back into funerals

On putting the FUN back into funerals 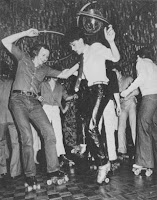 I've just redone my funeral play-list – AGAIN – this time giving it an all-female fronted synthpop look to give the grieving loved-ones something to get down and boogie with in the aisles.

The trouble is, in these days of production line send-offs, you're lucky to get half a tune as you're carried into the chapel and something uplifting at the end as the conveyor belt carts you off to your final appointment with the ovens.

All things being equal, it was pleasing to see that poor, dead Michael Jackson had the right idea by holding his funeral in a disco.

So – potentially as a plan to get the fun-fun-funeral play-list I want, but almost entirely to fulfil the prophecy of St Delboy ("This time next year, Rodders, we'll be millionaires") I am proud to announce the opening of Cinderella Grimreaperfellas – the world's first funeral night club and roller disco.

This distinction quite naturally excludes Student Union dances, which are much the same thing.

For the cheap sum of ten grand, the management at Cinderella Grimreaperfellas offers the recently departed:

And let's not forget – because we are aware of the need to ensure that traditional funeral rites are observed – the firing of the corpse out of a cannon straight up Jimmy Carr's arse as Reverend DJ plays poor, dead Coolio's I'll C U When U Get There.

That'll bring a tear to the eye.
Posted by Alistair Coleman at Thursday, August 27, 2009

Email ThisBlogThis!Share to TwitterShare to FacebookShare to Pinterest
Labels: funerals, roller-discos, this time next year rodders