On The Curse of The Duck

On The Curse of The Duck 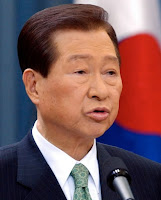 As the world sits on the very edge of firey nuclear destruction, your humble author arrives at Seoul’s Kimpo Airport for a bit of hush-hush work for some American friends.

Suffering from the explosive squits of the type I only ever experience on long-distance air travel, I stagger out of the gents’ in the arrival hall to see the excited face of my travelling companion and excellent colleague, Very Tall Dave.

"You’ll never guess who I’ve just seen" he says, and without pausing for my answer: "Michael Jackson."

"He’s probably here for the inauguration," I say, searching my hand luggage for my passport.

If we had LOL back then, I might have LOLed. Out loud.

And - one very mental taxi ride later (for we were on expenses to be met by American friends) through streets bedecked by flags celebrating the election of the new President Kim Dae Jung - we arrived at the hugely luxurious yet strangely deserted Westin Chosun Hotel.

We marched into reception, two English scruffs in a world of South Korean decadence in the face of Northern worker-soldier Juche self-determination.

"We’ve got a reservation. Duck and Very Tall Dave"

"We are sorry, sir" said the receptionist, "We cannot accommodate you. Err… Presidential orders."

"Michael Jackson is here. President Kim has given him the whole hotel."

"So, what are we to do?" asked Very Tall Dave, whose fault this was entirely, our plans for the best hotel jazz money can buy already evaporating, "Sleep on the streets?"

So we waved the Chosun goodbye, and headed for the dubious delights of The Hotel Manhattan, vowing revenge.

Oh yes. We would bide our time, but revenge would come.