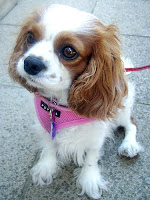 I find myself on the Rodwell Trail – a former railway line that ran near our house which now forms part of the Dorset Coast Path.

To my right, the majestic sweep of Chesil Beach, to the left, the noble ruins of Sandsfoot Castle. And in front of me, across the harbour, spectacular views of the cousin-marrying, mum-touching Isle of Portland, partially obscured by a fat bloke admiring my dog.

Forced out of the house on a wave of boredom, I eschew the ice cream kiosk in the castle gardens, and head down toward the yacht club and the hidden beaches that lie beyond.

And there, I meet Beer Gut Bald Guy, dog lover of this parish.

I look Beer Gut Bald Guy in the piggy eyes and tell him the name of my dog.

"Yeah. Don't get too close. He'll scratch your eyes out."
Posted by Alistair Coleman at Monday, August 31, 2009