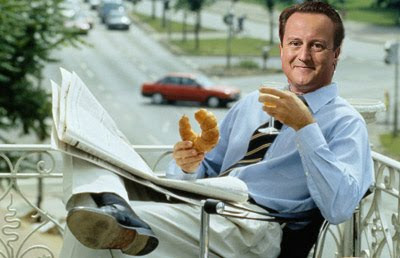 On this, my tenth anniversary of writing this rubbish, Here's another blog I've written for Huffington Post Comedy. Those of you who have ever doubted my sanity may be relieved to read my views on the scourge that is Coldplay, and send me presents by way of apology. *cough* birthday coming *cough*

It is not often that one feels a touch of sympathy for David Cameron, but the news that he is attracting the wrath of members of his own party over a policy U-turn on Europe has struck me somewhere in the proximity of my cold, cold heart. It's not that I'm pro- or anti-Cameron because that is not the point of my argument, but the fact that - once again - a politician's about-face is being seen as an act of personal weakness.

Let's make this abundantly clear from the start: People are actually allowed to change their minds. This may be a novel concept for some readers, but I assure you that this is something I have changed my mind over on several occasions. You may start with one point of view, but - after weighing up the available evidence - you may go around telling people that you now think completely differently. That is the human way. That is how we learn things. This is how most people have given up on the idea – for example - that the Earth was formed on the 23rd October 4004BC, about tea-time.

Nobody points at the Vatican and says "Huh. I see you're no longer saying that the Earth is at the centre of the universe. How can I trust you now with that whole Holy Sacrament business?" People point at the Vatican and say quite a number of things, but their U-turn on the Earth's place in the whole scheme of things is not one of them, for that way madness lies. Even those with deity-given infallibility are allowed to change their minds, unless they are wrong.

For example, I openly admit that I used to think that the band Coldplay were "quite good, actually". Granted, I would not have been prepared to wage warfare lasting hundreds of years to prove that Coldplay are better than any other popular beat combo, but I was firm in my view that Chris Martin's lads are reasonably good musicians who could hold a decent tune.

However, after several years of reasoned thinking in which my opinion sallied back and forth like a drunk teenager in a fairground bumper car, I came to the conclusion - based on the evidence of a number of albums and concert appearances - that Coldplay are tedious, dull and the kind of thing that is hastening us toward premature destruction at the hands of alien invaders determined to put us all out of our misery because of our liking of smug soft rock. The near ubiquity of "Paradise" as Congratulations-You've-Made-It-To-Boot-Camp music on TV talent shows being the final piece of evidence that tipped this reasoned mind over the edge.

I know what you're thinking, and it is this: "You utter mind-changing git". Yes, judge me. I can take it.

There's even an Americanized term for this: The flip-flop. Hordes of politics-watchers scan with obsessive fervour anything that comes out of the mouths of the political elite, hoping that they will contradict something they said in 1997 about planning policy for bus shelters before firing up the Flip-flop Klaxon on their desk hoping to humiliate the speaker as a dreadful, pathetic political turn-coat.

Changing your find should not be a sign of weakness. Flip-flopping should be a sign of strength. Flip-flops should only be the preserve of off-duty footballers and bargain bins outside seaside tat shops. Churchill changed his mind on a great many things, shifting political parties on two occasions, but is still revered as our greatest leader. Public opinion is still split, however, on his decision to become a dog. But I, for one, respect the strength of his decision-making.

Hear that, Mr Cameron? Strength! You can U-turn on anything you like and should not fear the judgment of others. Not your own party, not the public, nor the shrieking damnation of a weak-kneed press. It is completely within your power to turn up in the middle of Trafalgar Square on horseback, naked as the day you were born, and, in the presence of a coach load of Japanese tourists, say it loud, say it proud: "These NHS reforms are rubbish. What was I thinking?"

You may - at this stage - U-turn on your policy of not pushing a pencil up each nostril.

Nobody will think any less of you.
Posted by Alistair Coleman at Monday, February 06, 2012