THE INEVITABLE WAR OVER CONTROL OF THE WORLD CHEESE SUPPLY 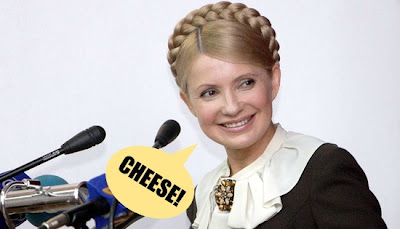 Call me mad, but I have a theory, and it is this: The bigger the country as a military power, I theorise, the worse its cheese and associated dairy products. Look at American cheese. Good grief, look at Russian cheese (if you can). In both cases, I'd rather eat next door's cat.

I mention this because it turns out that notorious cheese-criminals Russia and the peaceful cheese-producing nation that is The Ukraine* are on the verge of a major trade war over cheese exports.

It's just as bad as the spat the two countries endured over gas and oil exports, a dispute that ended with former glamour-puss turned mad cat woman Ukrainian PM Yulia Tymoshenko doing seven years in stir for dodgy corruption charges. Then there was that nasty business over a less than flattering review left in TripAdvisor ("Moscow seems OK, but the hotel maid didn't fold the toilet paper into a point"), after which all hell was let loose.

But this is Cheese! Cheese! One of the major food groups (along with Twiglets and Cherry Menthol-flavoured Tunes) that prop up the very fabric of our society. Governments rise and fall over the cheese supply, and we should be thankful that we have stayed out of the Euro and continued to plough our stable, bland furrow with English Cheddar, only sticking our heads over the parapet every Christmas with a brief foray into the lands of Stilton.

Will there be tanks at the gates of Kiev in a dispute over dairy products? Will the West be flying in stockpiles of Dairylea in the face of almost intolerable provocation? Will we be forced to witness a jeering Vladimir Putin mocking us all by moving the entire Russian government into a life-size copy of the Kremlin made entirely out of cheese?

Yes. I expect we will.

Worse: There is every danger that the Cheese War will turn into a Toasted Cheese War, culminating in the meltdown of society and Charlton Heston crawling up a beach screaming "EDAM them all! EDAM them all to HELL!" at a half-buried statue of Wallace and Gromit.

Some people think this would be A Bad Thing, but every cloud has its silver lining. In this case, the silver lining being stripping the bankers of the satisfaction of being the people responsible for the inevitable destruction of humanity as we know it. We will most certainly all be in it together, only some with better dairy products than others.

My advice to readers is to stock up on Cathedral City while you still can. Once this thing kicks off - and mark my words it will - there won't be an ounce of Feta to be found in any Waitrose for hundreds of miles around.

War is HELL, people. Cheese War will be - oh-ho! - CRACKERS.

But in other news, I am told, the butter crisis in Norway is officially over. No more crazy butter runs across the Skaggerak.

* Not to be confused with any other, lesser, Ukraines
Posted by Alistair Coleman at Wednesday, February 08, 2012