Another week, and another round of uplifting on-the-spot guidance by our least favourite East Asian despot. And what - you ask - has Kim Jong-un (Dress code: Shoplifter coat) been up to? And more to the point, what has he eaten, and where did he hide the bodies? 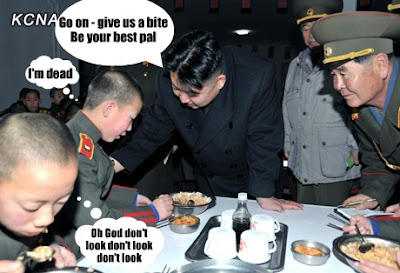 Our pal Kim Jong-un's been on another visit to his best pals in the North Korean military. Alas for our big-boned hero, it's a long time between elevenses and lunch-time, and the smell of tasty, tasty army rations becomes to much for him, and a loyal recruit happily gives up his bowl of crows' lungs and tree bark to the Young Generalissimo. 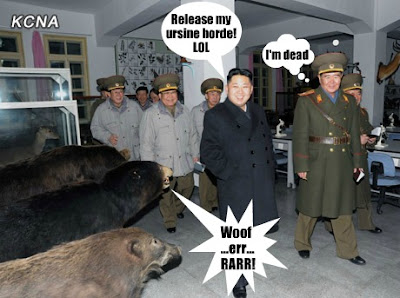 Having hardly sent anybody to the uranium mines on the prison moon of Rura Penthe for at least 30 minutes, Kim (he's not fat, it's his glands) finds new larks in the shape of his genetically engineered Bear Army. Bears! Bears with frickin' laser beams! 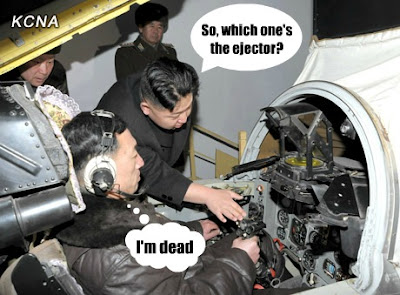 There's still time to drop off at the Air Force, where Kim Jong-un fancies a go on one of their sleek, fast MiG-29 fighter jets, worth a hundred of the puny American-built rust-buckets propping up the Seoul puppet regime. Except - what's this? - somebody's already in his seat. We'll have a bit less of that, won't we? 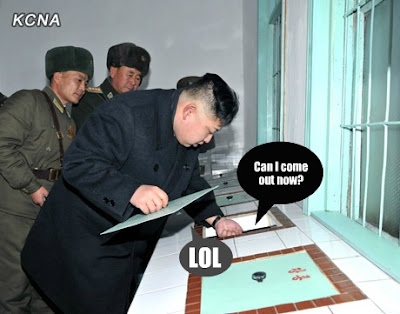 Supreme Leader of the North Korean Songun Revolution: Best job in the world.


Looking for genuine North Korean analysis? This is the site you're after
Posted by Alistair Coleman at Wednesday, February 01, 2012