Another day, and another visit to dispense on-the-spot guidance to the valiant one-worth-a-hundred-enemy members of the North Korean Navy, taking the Songun-policy inspired fight against the puppet Seoul clique to the high seas. 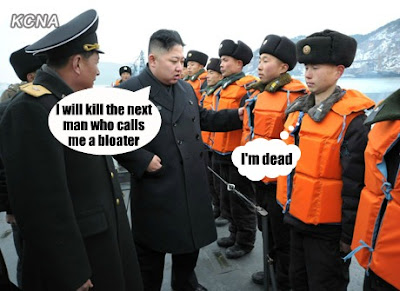 Sadly for the Young Generalissimo, he is under the impression that some of these brave Juche Warriors are mocking his fullsome girth. He is - in fact - big boned. And it's genetic. And he has water retention. And it's his glands. 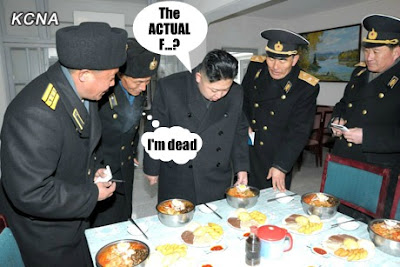 All this thought of food has made the Supreme Leader a tad peckish, for the path to eventual victory over the southern aggression army backed by the US warmonger human scum is a tiring one, so he heads below for a feast. Alas, the Great Ferrero Rocher shortage has hit the North Korean Navy hard. 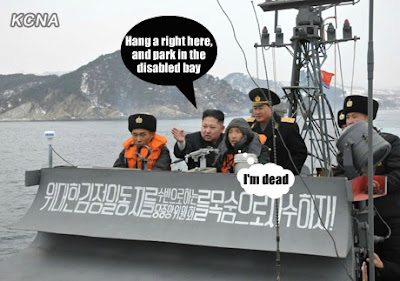 Only one thing for it - head off to the nearest McDonald's and use his Supreme Leader credentials to get a guaranteed parking space while a brave warrior from the O Jung Hup-led Seventh Regiment is sent ashore for a dozen quarter-pounder with cheese meals. Large, for preference. 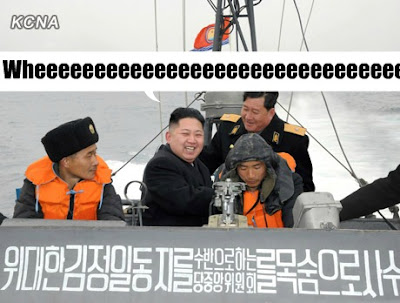 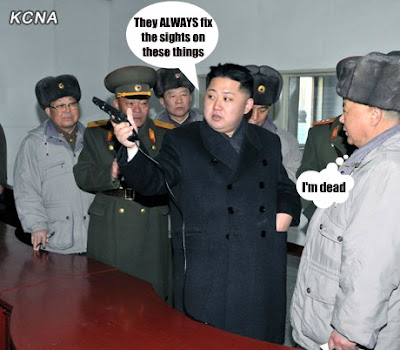 Then it's off the the funfair, where young Kim Jong-un attempts to shoot a packet of Maltesers off a shelf with a gun that fires corks. Then with a real gun, after which everybody agrees that he's such a good shot that he ought to keep all the Maltesers, and also the Kinder Eggs and the Toblerones. Besides, the man who runs the stall is in no fit state to argue (For eg: On account of standing between Kim and the last of the Polo mints, with tragic results).

Looking for genuine North Korean political analysis? This is your man
Posted by Alistair Coleman at Friday, February 10, 2012