On putting the flash into flash mob 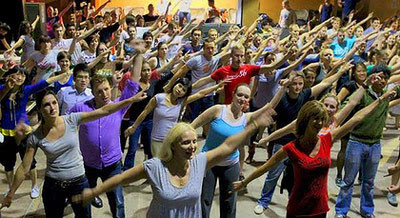 "Tell me," he said apropos of nothing, coming toward me in a manner that could only be described as a sidle, "When was the last time you were in a naked flash mob?"

I refuse to answer, but truth be told, it was only a week last Thursday. And while we are being honest about it, the event wasn't exactly a flash mob either, mostly on account of me being the only participant.

I blame myself for arranging it for three in the morning outside the student nurses' hall of residence.

Rather regretting it now, as a matter of fact.

The thing about naked flash mob, I reflected, sitting in the police cell whilst wearing a paper suit, is that someboday's always got to be on the outside, tackle to the wind, as it were.

ANNOUNCEMENT: Next naked flash mob is Tuesday, 5pm, St Pancras Station. Be there!
Posted by Alistair Coleman at Monday, February 13, 2012