North Korea, run by a bunch of raving lunatics, won't let the fact that he died last December get in the way of the celebrations of Kim Jong-il's 70th birthday. In fact, the fact that he's now absent will probably be an advantage, with hordes of sexy first aiders being able to stand down.

So, how do you mark The Day of the Shining Star, now that the Great Leader is lying, nicely embalmed in the local Hall of the People? Through the medium of chocolate equine statuary, that's how. 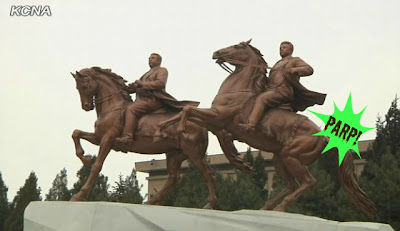 Alas, it proves - once again - the Danny Baker theory that no decent statue has ever been made since the advent of trousers. Still there's plenty of room on the plinth for a likeness of Kim Jong-un pulling off a dog, so who are we to argue? 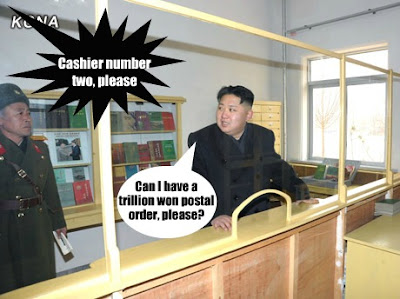 Life goes on, and it's Thursday, which means Kim Jong-un's allowance is in his Post Office account! Time for larks, japes, a visit to the tuck shop and the mail order purchase of a comedy SS-20 missile system from Crazy Mahmud Ahmadinejad's Joke Emporium. 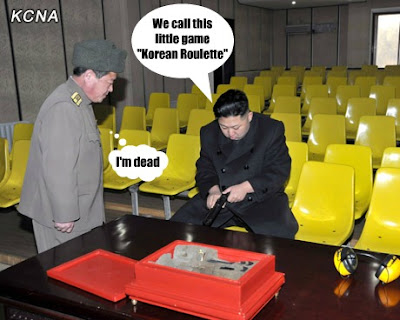 Sadly, there's been a problem with Kim's pocket money, and the cheque's bounced. Thankfully, the manager is more than obliging... 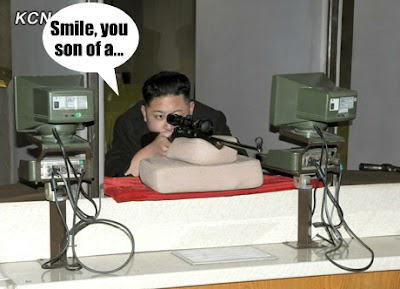 However, some of the disloyal staff are fleeing, their minds corrupted - undoubtedly - by anti-revolutionary filth spewing from the mouths of Yankee infiltrators. Never mind, a touch of full metal jacketed Juche-style re-education will sort them out. Best job in the world. 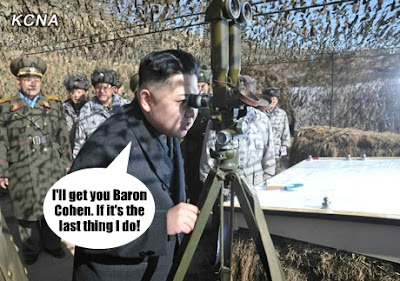 And then home to watch the Oscars on North Korean television, using the latest viewing equipment from North Korean factories staffed by loyal worker-soldier technicians, their chests bursting with patriotic zeal. But what fresh horror is this? Yankee Imperialist Zionist dog Sacha Baron Cohen insulting the memory of the Songun Revolution's Eternal Shining Star Kim Jong-il?

The shit, as they say, is going to hit the output of the Pyongyang No.3 Juche Revolutionary Electric Fan Factory.
Posted by Alistair Coleman at Tuesday, February 28, 2012