It was only a matter of time. Dear Leader Kim Jong-Il has gone corporate, and he's after the United States Yankee Imperialist dollar. This cannot end well. 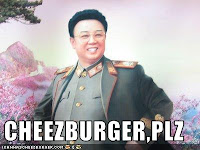 Congratulations on becoming the largest restaurant chain in the world! Your ability to give the people what they want at a low price and with only moderate long-term damage to health is an example that all corporations should aspire to.

I expect you are somewhat surprised to be receiving this letter from me, the Dear Leader of the Military-First Juche revolutionary ideology-based Democratic People's Republic of Korea where, I am sure you already know, you do not operate a single branch of your fine, fine restaurants.

Also, you appear to have the bad taste to have opened many outlets in the Capitalist Puppet State of South Korea, thus making your corporation an Enemy of the People, fit only for firey death at the hands of the nuclear weapons we are most certainly not building at the Top Secret Kim Il-Sung Memorial Firey Death To The Capitalist Dogs Nuclear Weapons Facility thirty miles north-east of P'yongyang.

We are, however, ready to bury the hatchet with your organization and its lovely, lovely hard US currency and invite you to open a restaurant at the heart of our glorious capital city. We do insist that you make one or two changes to your format before we will allow you to operate:

- Due to a shortage of bread and cows in North Korea - reserved as they are for our proud, heroic, victorious armed forces - we insist that you serve meals consisting of readily available alternatives, such as stray dogs and manhole covers

- The double stray dog and manhole cover sandwich MUST be marketed as the 'McKim'. No McKim, no deal

- Ronald McKim to replace that symbol of Western fear and ignorance, Ronald McDonald. Please tailor his outfit to indicate to the casual observer that he is fantastically well hung

- There will be no need for your so-called 'Happy Meals' in the glorious DPRK, because our citizens are already blissfully happy under my benevolent guidance and the firm leadership of the Workers' Party of Korea. Instead, we suggest 'Military-First Self Defence Meals', in which each child receives a clip of AK47 ammunition along with their scabby dog and manhole cover

- A ban on the use of the 'Golden Arches' logo. Instead, we insist that all branded products should feature Kirstie Allsopp and Sarah Beeny smeared in chicken fat

- Floodlit, 300 foot statues of brave Kylie Minogue and her wonky-eyed sister Dannii, mounted on rotating plinths so their peachy, firm buttocks always face the rays of the sun as it rises over sacred Mount Paektu. Undraped for preference, to remind our hardworking citizens of the naked aggression of the Capitalist West

I hope that these conditions are not too onerous, and that we can - one day - do business without the need to resort to the firey destruction of downtown Seoul at the hands of the nuclear weapons we are most certainly not building.