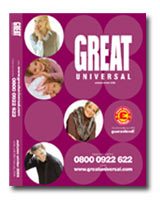 “I can do it seven times in a day”, Roger Finn claimed, as we lounged across the back five seats of the coach on a school trip to I know not where. It might even have been an away match for the chess club. Hardcore, that's us.

Ju-Vid, who owned vast quantities of pornography, and once came to school claiming that he'd got "three fingers up a girl in the upper sixth" the night before and hadn't washed his hands to prove it, reckoned he had done thirteen in one 24 hour period. It’s nice when someone gets a hobby. Ju-Vid's was that of a congenital liar who fingered raw fish.

Intrigued by my contemporaries' boasts of solo record breaking, I decided to go straight home and try it out myself. As you do when you're fourteen years old, and are free for an entire evening.

The only one-handed literature I possessed at that time was the autumn/winter 1980 Great Universal catalogue, and between pages 180-210 there were certain scantily clad young ladies wearing frilly things that were almost - but not quite - entirely see through. The fact that I would be reaching the vinegar strokes just as I got to the type of undergarment which had alternative uses in the shipbuilding industry may have, in retrospect, led to years of psychological problems which are only just being addressed through large doses of Zoe Salmon.

I got to three, and grimly tugging away, my bell-end felt like it had been rubbed down with sandpaper. I also found out for the first time that, no matter how hard you beat it, you eventually get to a point when nothing would come out. Any subsequent, agonising attempts to reach double figures resulted in nothing but fresh air and dust, like the last gasp of a punctured tyre.

The next morning, the school playground was filled with teenage brags of manly prowess resulting from the previous night's manipulations. I heard with my own ears someone claiming that he'd achieved a full twenty pulls "and the last one was at least a quarter of a pint", while friends looked on in awe. His laundry must have been awful.

"Six", I said, lying and far to exhausted to argue.

Members of the School Wanking Club were - that very evening - planning a full-scale assault on the record. Eye-sight would be wrecked irretrievably, and palms would be so hairy as to become King Kong's stunt doubles. Oh, that their hobby should end in such extreme woe.

On a subsequent school trip, as we drove to Woodley to give the creeps from Waingel's Copse School (otherwise known as Wanker's Cock) their annual thrashing at the hands of the County Champions (ie, us) the back-seat-of-the-coach banter got to such a stage that Paul Hackett boasted that he could make himself come "just by thinking about it".

We should have been mightily impressed with this feat of mind over matter. We weren't.

From that day he was known as "Hair Trigger".

I went home and tried it. Smugly, I did not possess a hair trigger, but returned to school the next day to claim nineteen for the night.

It was on that same fateful coach trip, that poor, poor Roger Finn cemented his position as the latest of late developers. Forgetting his previous seven-a-night boast from the week before, he blurted out: "So, this wanking business - how do you do it then?"

Even Mr Delaney, at the wheel of the school bus, was disgusted.
Posted by Alistair Coleman at Friday, February 17, 2006