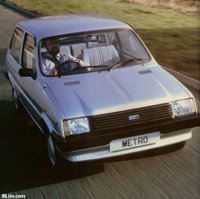 I have a confession. I may be the concrete, bullet-proof, invincible duck of your dreams, but there's one thing I've got to tell you. I failed my driving test. Badly. Horribly, horribly badly.

There was, you will be pleased to hear, woe involved. Woe, but hardly any mirth.

If it's any excuse, I was eighteen, arrogant and expecting the entire world on a plate. My parents had fronted a series of hideously expensive lessons with a very nice lady and her Mini Metro, which I hardly drove off a bridge in Henley-on-Thames, at all, scattering frightened pedestrians in my wake. I really was a most excellent driving student, right up to the moment I got behind the wheel of a car. Then I became as David Blunkett in a Ferrari.

I would pass my driving test first time, oh yes.

Interactive bollocks on CD-ROMs to test your reaction speeds?

Back in my day we had a miserable old bastard with a clipboard, with the power of life and death over your future ownership of a green Renault 4 sitting, rusting, on a driveway in Charvil. You drove, he ticked the boxes, and if the body count was less than double figures, you were allowed out on your own.

He was called W H Smith.

Now, that was a good start. Perhaps I'd like to start the car and turn right out of the test centre. So I did, maiming hardly anyone in the process.

Safari - so goodie! And only the u-turn, the reverse-round-the-corner, the hill start and the try-not-to-seriously-maim-anyone to go. And let's not forget the emergency stop.

Knowing my Spike Milligan, I replied "No there isn't" and drove on.

"No, no, no. Let me explain. When I hit my clipboard against the dashboard, I want you to assume there is a child in the road and make an emergency stop."

So, I spent so long watching the clipboard as I navigated around Henley, that only three cats, a dog and an unfortunate pigeon disappeared under the front wheels of the Mini Metro before the clipboard finally whumped against the dashboard.

My right foot slammed down on the brake.

At least I thought it was the brake.

"BAAAAAAARRRRRN!" said the Mini Metro, again, hurtling towards a bus queue, which helpfully scattered, giving me a free run at the Town Hall.

In fact, I had already failed for a number of reasons.

In particular, shouting “get your fucking truck out of the road!” to a lorry driver who had jack-knifed in the centre of Henley, as I allowed the Mini Metro to roll back slowly under the front axle of a dust cart.

Also: trying to go the wrong way round the one way system to avoid said dust cart and jack-knifed lorry.

Also also: Beeping and waving at a mate, whilst shouting "Oi oi Marteeee!" out of the window.

Things, I admit, could have gone better.

I passed second time round, mainly because W H Smith had previously - and totally accidentally - fallen down the stairs of the test centre. You can't prove anything.
Posted by Alistair Coleman at Friday, February 03, 2006