The Wednesday Thursday Vote-o of A Week Last Tuesday

I may as well face it. Despite the fact that Sir Stanley Matthews was playing top level football in his fifties, I've reached a point in my life when I can no longer hope to play up front for the Arsenal.

I'm might, at a pinch, get a game at left back this week, though.


The Wednesday Thursday Vote-o of A Week Last Tuesday

A new concept in Thursday vote-o technology, as the vote-o meets the Misty Double Entendre Wednesday, where the finest minds of this generation meet on in polite society and talk utter, utter filth.

All the vote-o quote-os, if you're still following this, relate to the caption competition surrounding the charming image of suburban life you see below. There's just no privacy for a Prince of the Realm these days. 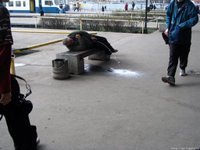 Vote-me-up, then, for Friday's story of mirth and woe with a Thursday vote-o from a Wednesday picture competition. I think I may need to lie down for a bit.

* Dibs: "As the final model coasted down the catwalk, the audience went wild with drug-fuelled delight. Yes, it had been another London Fashion Week triumph for Vivienne Westwood. If only the reaction at Tehran Fashion Week had been the same..."

* Pickle: "It would go down as Ken Livingstone's finest achievement as Mayor of London. They had finally found a use for the last empty plinth in Trafalgar Square.

* Meat: "Despite the best of intentions, Foul Ole Ron succumbed to the curse of the Special Brew and had that dream again. As he reached the part when the small boy said "Your mother licks tramps", he couldn't help himself. He knew there and then it would be another night rummaging through the Salvation Army bins."

* Gaylord: "With old age catching up with him, the intrepid explorer Sir Scary Twistleton-Duck finally made the discovery that has eluded mankind for centuries: the legendary Fountain of Youth. What the gentlemen of the Royal Geographic Society didn't know, he decided, wouldn't hurt them."

Now, get out there and vote-me-up, or I'll send Misty round with her biggest axe. And you wouldn't want that.
Posted by Alistair Coleman at Thursday, February 16, 2006