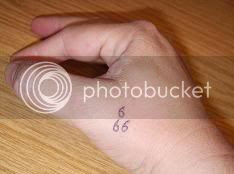 This week's terrifying 6th June 2006 - 6/6/6 - a day in which Satan made me put my underwear on back-to-front and forced me to eat a catering-sized pack of Mini Cheddars, also saw the release of a rather dull remake of The Omen, chronicling the birth and rise of the Anti-Christ of biblical prophecy.

The original film came out in 1976, and I didn't catch up with it until at least 1981 when it was shown on television at the height of my paranoia that the world was going to end on September 12th that year. It didn't. To say the film and its gory sequel had a profound effect on me would be an understatement to say the least, most notably in my failed attempts to arrive at Armageddon without the burden of my virginity. In this aspect, my life was an utter failure.

As a matter of fact, we recorded The Omen on our brand new push-button VHS recorder, which set our family back a whopping 450 pounds for a huge, clunking piece of machinery. I watched this film, and the other two we had [Jaws and Porridge: The Movie] - thanks to the prohibitively expensive cost of blank tapes - with a quasi-religious fervour, freeze-framing the part where David Warner's severed head bounced across a sheet of glass with appalled fascination. I even considered writing a letter of thanks to the producers, urging them to add more kinky nun sex to any further sequels, as you can't get enough randy nuns, ever.

I like to think that The Omen made me the sane, balanced individual I am today.

One of the plot devices in the original film was the use of photography to show which characters had been marked for death by the Devil. Anybody of Satan's doomed list would appear in photographs with a series of ever-darkening streaks depicting the eventual manner of their demise. David Warner, for example knew of his end in advance, the line through his neck tallying with his head falling off and bouncing like a little rubber ball down some darkened street.

It was the character played by former Doctor Who Patrick Troughton who revealed this phenomenon, his priest possessing photographs of himself, a dark rod piercing his body at the neck, emerging, as you do, through the groin. As he predicted in his hour of woe, he was impaled by a flag pole outside a church in Fulham, which serves him right, to be honest.

There are two things you should know at this juncture. One: I had an unnatural interest in photography, and with all the lights out, my bedroom became a passable darkroom. Two: I had this painful trapped nerve in my neck which I was convinced was the makings of a fatal brain haemorrhage. Every twitch of my neck would send a bolt of pain through the back of my skull, emerging through my right eye. Ouchies.

So, after watching The Omen for only the third time that week, I went upstairs, kicked the wedge under the bedroom door to keep family members out at inconvenient moments, and set about the film which I had just retrieved from my camera. After a couple of hours involving yellow liquids and fumbling around in the dark, I switched the light on to a couple of dozen prints hanging up to dry above the radiator.

Studying them closely for the first time, I realised that something had gone wrong at some stage in the developing process, and that light had managed to find its way in, probably a result of my mum switching on the landing light just as I dropped the unprocessed film onto the bedroom carpet. Every single photo had streaks of black and white across them. My evening's work. Spoiled, utterly. Bugger my luck.

My attention was drawn to one photograph in particular. It was a self-portrait, and yes, you foul specimens, I did have my clothes on, mostly because it was taken in the front garden. There was this unearthly black line, coming in from the very top of the frame, piercing my neck, and emerging from my body halfway down my abdomen. Marked for death, in the eternal burning pits of Hell. Those black lines didn't do the dog any favours either, and ten years later he died. Gneep!

My trapped nerved twitched, sending the now familiar blinding flash of pain up my neck, echoing around my skull. At any moment, devil-worshippers might burst into our house demanding a virgin for sacrifice in the name of the Anti-Christ, and I'd be bang to rights. Gneep!

Convinced the Prince of Darkness himself was coming after me, I shat meself. For several weeks.

I put my continued survival down to a technicality. The result of a series of unfortunate spelling mistakes by a dyslexic copy-typist, I appear to have sold my arsehole to Santa. Which is lucky for me, as it happens, because the old beardy fella's hung like a gnat and only comes once a year.

He walks amongst us, you realise. My money's on Daniel O'Donnell.
Posted by Alistair Coleman at Friday, June 09, 2006