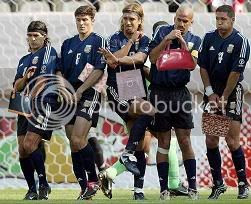 I understand that there is a sizeable minority amongst my readership who do not give half a shit (let alone a whole one) for the World Cup. I hear you, grieve for your pain, and may, under exceptional circumstances, help pay for your treatment.

This does not change the fact, however, that you will spend the next month having Wayne Rooney stuffed down your throat, and that is a mental image I would rather not entertain, thank you very much.

Therefore, I see it as my duty to find something to do for the next month in order to divert your attention away from the feast of sport and rampant commercialism that will occupy the so-called civilised world for the next four weeks. It's the very least I can do, and you'll thank me for it one day.

So, why not switch off your television set and try out one of these fulfilling pastimes?

* Cut your toenails, and spend four weeks carefully sorting and cataloguing the clippings as part of an entry for the Turner Prize

* Make meticulous plans, recruit a small army and purchase weaponry from the Chinese government in order to invade the newly-formed nation of Montenegro, to teach the buggers a lesson about the transient nature of democracy and independence

* Secure the funding to design and build miniature jet packs for flightless birds such as penguins and ostriches, so they can enjoy the skies as much as their airborne cousins

* Invent a new kind of cheese made from human breast milk (called "Che- 40DD -ar"), recruiting TV's Wallace and Grommit for the advertising campaign, perhaps going as far as persuading the wacky inventor to come up with some sort of charming yet over-engineered milking machine into the bargain.

* Undergo a series of needlessly expensive and painful operations to have a bottom grafted onto your face, and change your name to Jenson Buttocks. With an arse for a face, just think of the lucrative career you'll enjoy on the Celebrity Lookalikes circuit. The girls will throw themselves at you - just ask Paul McCartney!

* Take a week's holiday in Sunni Iraq. By the time the SAS rescue your sorry arse, England will have been knocked out and everything will be back to normal.

* Get a hobby, like stamp collecting or something. I dunno.

So: what are you planning? A night on the tiles with Gazza and Five Bellies for the best suggest-o.
Posted by Alistair Coleman at Wednesday, June 07, 2006