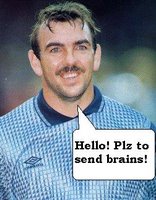 My brain is obviously wired up all wrong. All the recreational substances I have ever sampled have left me completely unmoved.

I once did speed, and everything actually slowed down.

Engulfed in a cloud of cannabis smoke, and surrounded by giggling buddies, my mind was always, always focused in dreadful clarity, taking in every last detail.

I daren't take anything else, for fear that they are actually joke shop pills that give you the squirts, turn you tongue blue or make you into a ladyboy. Or possibly all three.

I have, in my time experienced positively no reaction from any wacky baccy, funny pills or giggling powder that has been offered to me, while all around me all kinds of illegality and immorality has taken place.

Life's a bastard like that. Or quite excellent, depending on your point of view. I veer towards the latter, because I value what few shreds of my sanity that remain.

Not so my companions at a football match a few years ago.

We drove up to Merseyside in a clapped out Ford Escort, the car filled with a fug of smoke of different varieties. Completely unmoved, and fearing for our safety, I ended up driving, thus costing me a small fortune in teeny Scouse car park minders. You've got to pay 'em up front - anything could happen to your car while you're away if you don't, the little shits. Not so the Brummie version, who accept payment on your return, and after all these years, they still haven't made a penny.

So, while I sat in the away end at Everton feeling cheated at the fact that large quantities of pills and doobage had produced the usual zero effect, all my companions were having a whale of a time watching the most dour, pointless end-of-season football match I had ever witnessed.

There's nothing funny about the Arsenal back four at the best of times, but the others where literally rolling in the aisles, while I was cold, wet, bored and disappointed by the quality of the meat pies.

It did come to a head, however, when one of my poor, poor somewhat-under-the-influence friends was shown the exit by some extremly burly stewards who had clearly seen enough on both the pitch and in the stands, and decided the best way to warm themselves up was to start throwing blitzed cockneys out onto the streets to an uncertain future at the hands of the waiting scallies.

Poor, poor Mike. We found him, a gibbering wreck, at five o'clock, huddled against the car in Stanley Park, tears in his eyes, doling out free cigarettes to a gang of lightly-armed twelve-year-olds.

Only one word would pass his lips.

We slapped him around a bit until he came to his senses, and found that he had possibly sold the Escort to a teeny crime lord to buy his silence.

There was a funny smell, too.

It was several days before he could bring himself to tell us why he had genuinely shat his own pants, in public, at a football match.

In lieu of a slice of orange and a cup of tea, Neville "Binman" Southall, the already big-boned Everton goalkeeper, had spent much of the first half growing to epic proportions, and had then tried to eat him as a half-time snack.

Of course, having a panic attack over a fifty-foot Neville Southall trying to climb into the stand, bite your head off and suck out your innards, does tend to single you out a bit in a crowd. Tony Cottee on the other hand, had shrunk down to the size of an ant, and had eventually disappeared. Much like his football career.

If that's what drugs do to your brain, then I am happy to remain relatively sane.

There is, of course, a dreadful moral to all this: