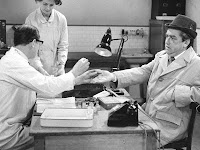 FACT! People who listen to music through headphones have heads 17% larger than those who do not. This is due to the long-term effects of music forcing micro-currents of air into the listener's cranium, gradually inflating the skull over a number of years. The medical term for this is Tefal Syndrome.

FACT! One of the world's most enduring urban myths is that Eskimos have over 300 words for snow. In fact, they have just two: "snow" and "yellow snow"

FACT: Thanks to a newly-signed sponsorship deal, there are 57 states in the United States of America. One for each tasty, tasty Heinz variety.

FACT! You can avoid giving blood by claiming that you once borrowed a sleeping bag from a male nurse.

Question: When giving blood, how do you know when you've given enough?
Answer: You know that sound you make with a straw when you get to the bottom of a McDonald's milk shake? That sound"
Posted by Alistair Coleman at Wednesday, December 30, 2009

Email ThisBlogThis!Share to TwitterShare to FacebookShare to Pinterest
Labels: FACTS