On things not to say at a funeral

On things not to say at a funeral 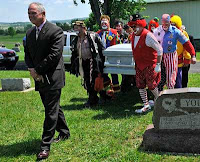 - "We've swapped the funeral music for the Birdie Song. Let's see if they're GAME FOR A LAUGH!"

- "Skip to the end, padre. I've got a good feeling about the will."

- "Has anyone mentioned that you look SO hot in black?"

- "Yeah, face down and covered in garlic, as per your instructions."

- "And the real tragedy is that Jim Davidson's still walking the Earth."

- "I thought it was going to be a Y-shaped coffin"

From Twitter's @DanielOppenheim, who wins an INTARNET: "HA! You dead bastard! I made it! I'm Solihull's 4th greatest piano tuner now!!!"

I have actually said one of these lines. Go on, guess.