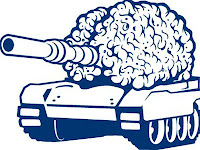 You can always tell a slow news day when some mysteriously-funded think tank hits the headlines with some half-baked suggestion that the nation could slash its massive deficit by sacking all the doctors, nurses, ambulance drivers, police and firemen because "there are rather a lot of them, aren't there?"

Like this, for example: BBC News - Mysteriously-funded think tank calls for sacking of doctors, nurses, ambulance drivers, police and firemen because "there are rather a lot of them, aren't there?".

It comes as no surprise to learn that absolutely anybody can set themselves up as a think tank, and get a slice of that big, fat mysteriously-funded mysterious think tank funding.

And the more outrageous your ideas, the bigger the headlines on a slow December Tuesday. And the more money you get for future cloud cuckoo ideas.

I want some of that big, fat tasty pie, and thus THINKIUM – the official Scaryduck Think Tank – is born.

All we need now is to do the hard work – the actual thinking – and come up with some money-making, headline-grabbing big ideas that will be splashed all over the Daily Mail as A Good Idea.

- Outsourcing all publicly-funded ambo-fire-police officers to the private sector, with the AA as the preferred bidder. As a side-effect, the AA renames itself "the only emergency service". See also: 0118 999 881 999 119 7253

- Diversify the Armed Forces into other, more profitable areas. For example: The Queen's Own Kwik Fit Light Infantry

- A one-in-one-out immigration policy. For every decent, hard-working person who comes in we kick out a scrounging BNP voter (@ThirdmanUK)

- Replace every government cabinet member with a think tank that works inside a giant statue of a politician (@mattround). At night, a door opens in the side of the statue, and the think tank is allowed out to fight crime, dressed as a crime-fighting dog

That's as good a start as any. Once David Cameron sends us £££s for these excellent ideas, we'll be on Easy Street. This time next year, Rodders...
Posted by Alistair Coleman at Wednesday, December 09, 2009