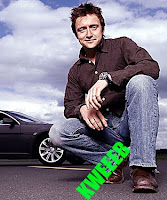 Some people are saying Top Gear's jumped the shark.

They're wrong, of course.

Having said that, it is clear they may be struggling in their quest to stay at the cutting edge of cocking about.

Fear not, Stig fans – we're working on it. And after literally minutes of frenzied brain-storming, thought-showers, solutioneering and scuba-diving in our think-tank, here's what we've come up with:

- Which Japanese budget car would make the best Kamikaze plane? James May uses MATHS, SCIENCE and a bloody great catapult to fire Nissan Micras at the Isle of Wight ferry whilst jumping over a shark

- Star in a Reasonably-Priced Car – Maureen from Driving School. And Stevie Wonder

- Richard "Hamster" Hammond drives the new Ford Ka down to the corner shop for twenty Bensons and a copy of Nuts magazine, but hilariously crashes and burns whilst negotiating a speed hump in Shepherd's Bush

- RACE CHALLENGE: The boys race across Europe from Bulgaria to a cabbage farm in Suffolk. How many immigrants can they get across the Channel in the back of a family-sized luxury estate? Jeremy wins with a grand total of 117 through cunning use of a garden shredder ("Nothing in the rules says they have to arrive intact")

"Next week we start our own Bulgarian-flavoured kebab vans. And on that bombshell..."
Posted by Alistair Coleman at Tuesday, December 15, 2009