On the Daily Fail's greatest FAIL

On the Daily Fail's greatest FAIL 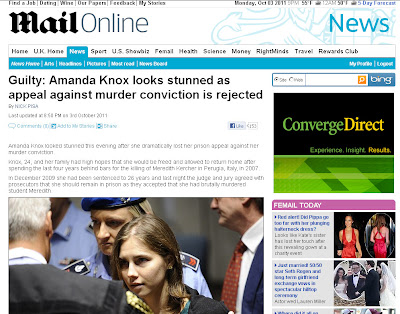 Those of you on top of the news may have noticed the brouhaha following the acquittal of Amanda Knox over the murder of British student Meredith Kercher.

However, if you were waiting for the verdict on the Daily Mail's website, you would - thanks to an itchy finger on the "publish" button - think that Miss Knox is still as guilty as hell. So guilty, they published the full story complete with court reactions and quotes THAT NEVER HAPPENED except in their own imaginations.

As they say is the world of journalism where it's publish first, issue corrections later: "Never Wrong For Long"

However, it's not the first time that the Daily Mail's got it wrong with the big stories. Here are a few more headlines from the times they've jumped the gun of history:

Captain Scott first to South Pole, heading back to England. "So glad I made it home safe," says new national hero

"That was the best play I ever saw" says President Lincoln "Another big hit for Ford's Theatre!"