The Art of the local newspaper photograph

The Art of the local newspaper photograph

If there's one thing guaranteed to make me laugh like a stupid, it's the photographs in local newspapers. Little things, little minds, like.

Can you imagine the life of a photographer at a local rag? I really feel for these people, because it is clearly not their fault. Not their fault that they are trained to ridiculously high standards including the latest darkroom techniques, the intricacies of cutting-edge technology (which they invariably have to buy out of their own pocket) the limitations and capabilities of digital photography and the workings of image manipulation software.

After spending several years studying their art at some college, in which they must stage a final, multi-subject, multi-technique exhibition (usually funded out of their own pocket) in which their entire future hangs on the whim of the examiner getting out of the right side of bed in the morning, they might actually be allowed to work for the Oswestry Examiner.

For about ten grand a year, you roam your home town and its environs, photographing WI meetings, kids with certificates, the town crier, and old ladies pointing, grimly, to the spot in the gutter where they found a dead rat, and what's the council going to do about it? One day, you might be allowed to graduate on to local councilors, the vicar, and, if you kill enough people, the Holy Grail: Saturday afternoon football.

In my time, I have been in a number of local newspapers, and not just in the "Around the Courts" page. I should have learned by now, but every time I've gone to the rag with a story, they reply with "can we send a photographer round?" Before I know it, I'm sharing a chip wrapper with the local criminals, the mayor, a school sports day, and I'm there, on page six, pointing at something. I was once in a newspaper, pointing at some newspapers, like some recursive nightmare.

A test! Can you work out what is upsetting these people?

Or, why this bloke is pointing at a dead buddha 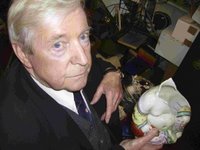 Or, why these pissed off people are so pissed off?

Oh, cheer up you miserable pair. 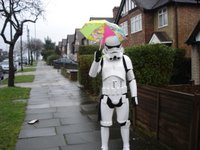 You'll never get this one.